By Tumex7 (self meida writer) | 1 months 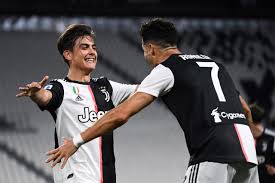 Juventus won their last league match against Cagliari on Sunday, in a match that ended three goals to one, in favor of Juventus.

Barcelona who are currently placed second on the La Liga standing table, are hoping to bolstering their squad ahead of summer transfer window.

Barcelona New president has shortlisted a number of players he would to sign.

One of those players is Juventus world class striker.

Paulo Bruno Exequiel Dybala is an Argentine professional footballer who plays as a forward for Serie A club Juventus and the Argentina national team. Considered one of the world's most valuable players, he is commonly referred to as "La Joya".

Report claimed that Barcelona want to give Juventus Antonio Griezmann and collect Dybala.

However, according to a report, Barcelona could announce the signing of the Argentina international who plays alongside Cristiano Ronaldo at Juventus.

Do you think Dybala will be happy to play alongside Lionel Messi at club level, having played together at Argetina national team?

Content created and supplied by: Tumex7 (via Opera News )

"On Monday, I Helped A Woman Who Was In Labour By The Road Side Give Birth" -- Lady

Fans react as Ebuka Shares cool photos of himself juggling a can of beer.

Classic Shoes For Ladies To Rock To Any Event