The English football governing body popularly known as Premier League have revealed the record that was set by Egyptian superstar Mohamed Salah, after netting a hat-trick in Liverpool FC 5-0 away victory over Manchester United at Old Trafford. 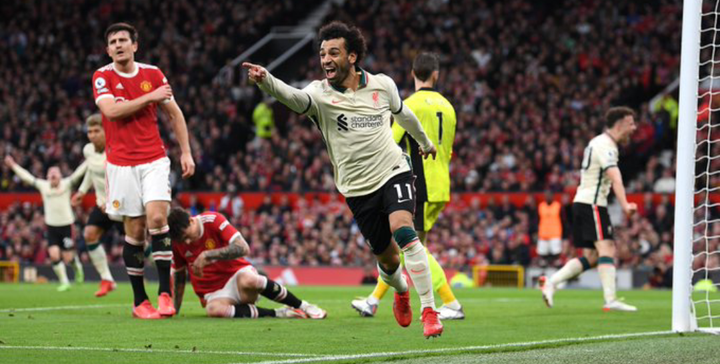 The former Chelsea football club was at his best against the Red Devils, and he was able to play a vital role in his team's convincing victory.

Coach Jurgen Klopp gave Salah another starting role in his team's attack alongside Roberto Firmino and Sadio Mane and he was able to outshine his mates on the pitch. Nabil Keita opened scoring for Liverpool football club in the 5th minutes, Diogo Jota doubled the lead in the 13th minutes and Mohamed Salah made it 3-0 in the 38th minutes, before the Egyptian scored his second goal of the game in the 45th minutes to end the first half 4-0.

He completed his hat-trick in the 50th minutes through an assist from England star Jordan Henderson to end the match 5-0.

With Mohamed Salah's three goals, it means he has become the first player in history to score a hat-trick against Manchester United at Old Trafford. The Premier League revealed Mohamed Salah's new record, as they posted on their verified Twitter handle that;

"Mohamed Salah is the first away player to score a Premier League hat-trick at Manchester United football club."

A record-breaking and historic display at Old Trafford by the Egyptian.