Blacklives Matter; See The Nigerian Born Footballer Who Was Called A "Fat Water Buffalo" In England Saheed Adebayo Akinfenwa was born in Islington, London, to Nigerian parents. His father is a Muslim and his mother is a Christian. He grew up as a Muslim and later converted to Christian. He is currently 38-years-old and weighs roughly 101kg, he can bench press 200kg, almost double his own weight. Akinfenwa has become well known for being ranked as the strongest footballer in the world in various editions of the Fifa videogame series. He currently plays in Wycombe Wanderers as a top striker. 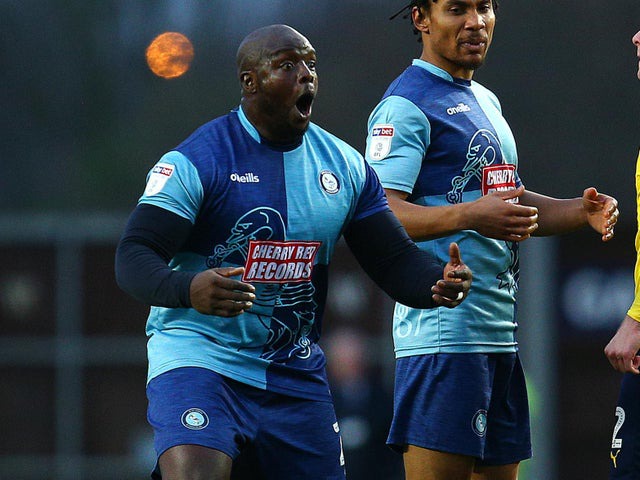 Wycombe Wanderers are through to the league one play-off final against Oxford United after Monday's 2-2 draw that secured a 6-3 aggregate win. Akinfenwa came off the bench for the second half of the semifinal second leg tie at Adams Park, only for the night to be marred for the 38-year-old fans favorite. Akinfenwa released a statement on Wednesday outlining the incident and said "we as a sport and society must wake up". His statement read;

"What should have been an evening of joy and excitement quickly turned into one of anger and frustration. Following the conclusion of the game, I learned that a representative of the opposition had repeatedly referred to me as a "Fat Water Buffalo" in a derogatory tone. Regardless of whether or not there was deliberate racial intent by using that language and irrespective of the context in which it was used, if we are to make real and long standing change then we must strive to educate each other about these issues. We must work together to ensure those who have not and do not face racial prejudice understand that what may appear to them to be a throwaway remark can have such a big and hurtful impact. A water Buffalo is a dark animal and as a black man I believe that you have dehumanized me, by associating me with a dark animal, as this was said in a derogatory manner " Akinfenwa stated that.

Blacklives Matter, say no to racism.