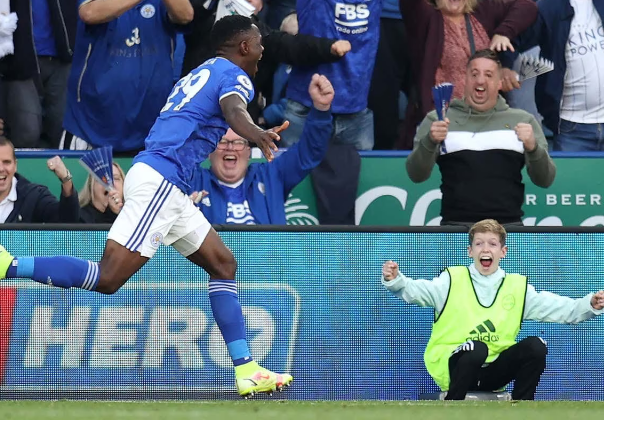 In the 77th minute, the 23-year-old replaced Nigeria's Kelechi Iheanacho, and he sealed the hosts' emphatic victory in stoppage time.

The Zambian international had previously played five games for Leicester in all competitions without scoring prior to Saturday's breakthrough.

The game marked the Daka second league appearance since joining the Foxes on a five-year deal from RB Salzburg in July.

Earlier in the game, kelechi assisted Tielemans to equalize Greenwood's opener in the first half.

Soyuncu and Vardy scored later in the second half to put Brendan Rodgers' side ahead before Daka's effort.

The Foxes moved up to 11th in the premier league table after accumulating 11 points in eight games.

The Red Devils, on the other hand, have lost their last three premier league games and have fallen to fifth place in the table.

But it was manchester who broke the deadlock, thanks to Greenwood, who appeared out of nowhere to create a yard of space on the right flank before opening up his body to send a rocket of a left-footed shot into the back of the net.

Leicester did well to respond quickly and to persist with their neat passing football, which resulted in a spectacular equalizer. Manchester attempted to play out from the back, and Maguire was caught in possession by Iheanacho.

The foxes then started quickly in the second half, and they continued to dominate possession and looked the most likely to score, but United rode their luck to stay level.

However, three goals were scored in the span of five minutes. First, Leicester took the lead when Soyuncu was in the right place at the right time to tuck a corner into the back of the net.