By Swatman (self media writer) | 18 days ago

Stade Rennes won PSG during their ligue 1 clash at Roazhon Park today. The game ended 2-0 in favour Stade Rennes despite the amount of chances created by Lionel Messi.

In just first half, Lionel Messi created over 3 clear chances which could have led to a goal but Neymar and Kylian Mbappe kept missing.

Kylian Mbappe later scored at the 68th minute of the game but it was ruled out as offside by VAR. Lionel Messi kept putting his all in the game but nothing was working out. Messi is among the top contenders of the 2021 Ballon d'or award, he won the Copa America and also performed well in Laliga last season. Robert Lewandowski and Jorginho are also in that category. Jorginho won the EURO 2020 trophy, Super Cup trophy and UEFA champions league trophy.

Robert Lewandowski scored a lot of goals for both his club and country, this makes him part of the players in this category.

There is a possibility that Messi could miss out in this award if Neymar and Mbappe continues with their inability to score goals. Both Mbappe and Neymar missed clear chances against Stade Rennes, they both denied Messi of about 3 assists in the game. Hakimi Achraf is really trying but his combination with Messi and Di Maria was not that sharp today.

Pochettino really need to talk to his players unless he might lose his job if this type of performance continues. It is quite shameful that Stade Rennes will win PSG when there is Messi, Neymar, Mbappe and Di Maria. 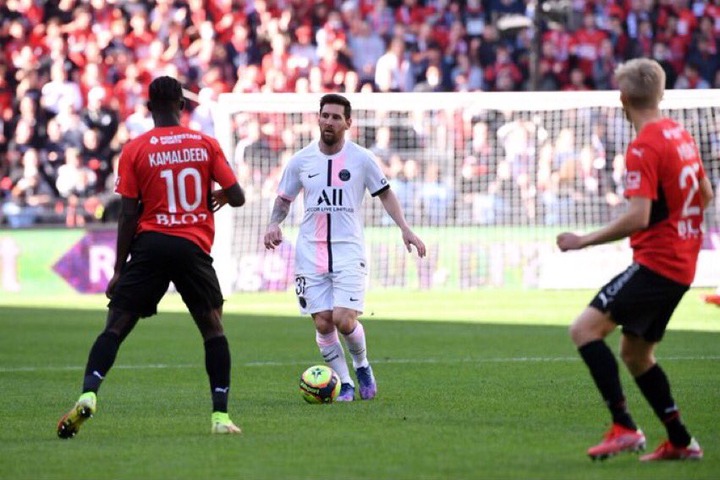 Stade Rennes are gradually getting up in the ligue 1 table, they have not been on form since the season started but there is an improvement now.