If You Still Think That All Sports And Games In Africa Were Imported, Then Check This Out.

By OfficialEnioba (self media writer) | 1 year ago 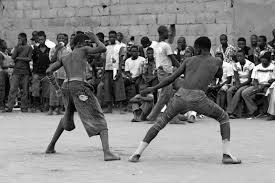 It is no exaggeration to opine that the continent of Africa has been, from time immemorial, a sport-loving continent. The validity of this claim is held aloft through various tractable evidences provided by a wide range of sports and games found to be extant on the “Dark Continent”.

Aside from having advanced technology, rich economies through trade and powerful kings, queens and armies, ancient African societies engaged in various sporting activities.Sport was a major part of societal life that brought the people together. Many people, young and old, male, female, royal or citizen looked forward to the games that were scheduled every now and then as a way of enhancing interactions among people.

Although, many African societies had board games like ‘Ayo Olopon’, popular among the Yoruba people of Western part of Nigeria, that they played during their leisure time, there also existed several physical games that were played outdoors. Many of which have been discovered to have been adopted into western sporting events. Examples of such physical games in Africa are:

Senegalese Wrestling: This sport originated from Senegal among the Serer traditional people. It is known as Laamb in the Wolof language and Njom among the serer speaking people. It was a wrestling sport meant to train warriors and later became a sporting activity that the people organized.

Capoeira: This martial art sporting activity originated from Angola and was called N’golo by the indigenous Angolans. It gained the name ‘Capoeira’ in Brazil in the 16th century after slaves taken from Africa started to indulge in it during their free time on the plantations. It involved music and dance.

Savika: This sport started in Madagascar as a rite of passage for boys to be initiated into manhood. It was also a way for single strong men to show off their strength in a way to get wives. The rite was started in ancient Africa by the Betsileo ethnic group in Madagascar around the 6th century. The game is very dangerous and leads to severe injury and in rare cases death, but the sporting activity seems to be loved and has developed and travelled off to Spain.

Ta Kurt el Mahag: It originated from Libya among the Berber tribesmen who played it. The game shows ancient African intelligence and reasoning and is said to be the origin of what is known as baseball today. This ancient African game and its European counterpart have striking similarities. Even though just discovered in the 1930s, the game is believed to date back for as long as the Berbers existed. It is believed that the Berber traders introduced the game to the Europeans which later became baseball.

Another sport that is indigenous to Africa is Stick fighting also referred to as Nguni by the people of Southern Africa; there is also Donkey racing that is famous among Kenyans of the island of Lamu. Added to the traditional sports and games that Africa is known for is Dambe boxing with ties to Hausa of Northern Nigeria. The list is almost inexhaustible as it goes on and on.

However, as the Europeans’ contacts with Africans became more pronounced and their relationships flourished, there came along some European sports and games to the African continent. Such games and sports like soccer, cricket, volleyball, basketball and others in the categories of field and track events were introduced. These games and sports have been greatly enshrined into the fabric of physical activities in Africa today and this has helped a great deal to revolutionize the face of sports and games on the continent, as well as showcase talents of African extraction to the world.