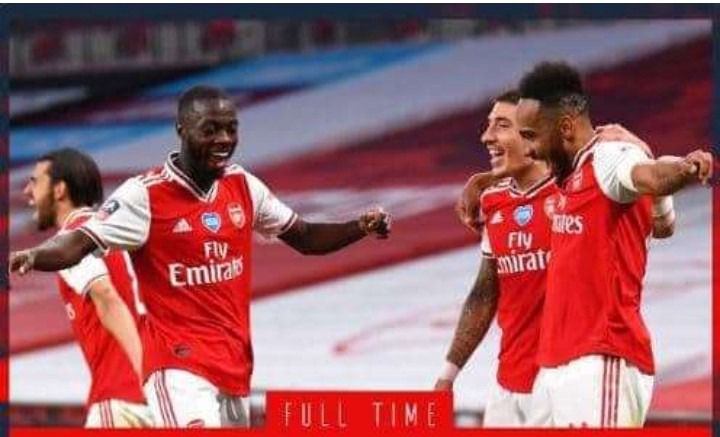 A picture of Aubameyang first goal Aubameyang seal arsenal place in the final with second goal.

Arsenal played a more defensive game to keep Manchester city who dominated the game for full 90 minutes at bare. After Aubameyang missed some couple of big chances in the early stages of the game, he however found the back of the net in the 19 minute after a neat crossing by Pepe was neatly struck in by the Garbon international.

Manchester city played well but missed so many chances. Arsenal goalee Martinez did well to keep arsenal in the game with a nice save from Mahrez shot right in the 18 yard box. With Manchester city putting arsenal under pressure the gunners kept their watch to prevent any mistake that will lead to a goal. Arsenal got their second goal in the 71 minute as Tierney flipped cross was caught by Aubameyang who made a run into the city box to grab his second goal of the night.

Picture of David luiz in action for arsenal

A fantastic display by David Luiz at the arsenal back line help gave arsenal in form goalkeeper Martinez another clean sheet. Luiz performance was absolutely phenomenal. The player got a rating of 10.0, 'what a nice defensive job by the Brazilian'.

At the end if the game, Mikel Arteta hipped much praise on his players for their fine display against the citizens. He went on to single out Dani Ceballos the Madrid loan player at arsenal who has put in a lot of hard work to establish himself as a regular starter under the Spaniard.

A fine display and a deserved win for the gunners.