By Tolani.com (self media writer) | 1 year ago

The 2019-20 Premier League season has been the most unforgettable campaign in the modern era. The coronavirus outbreak in Europe meant all footballing activity was suspended in the continent for the first time since World War 2. However, after the three months hiatus owing to the global pandemic, the Premier League made its much-awaited return last month.

Liverpool's exploits have been the talk of the current season, as the Reds dominated the league campaign right from the get-go and sealed their first title in over 30 years.

Jurgen Klopp's side won the Premier League title with seven games to spare and could finish the season with 99 points - the second-highest tally in the history of the competition.

Much like any other league season, several top players have enhanced their reputations with stellar performances, while a handful of star names have failed to produce the goods.

On that note, we look at 10 Premier League players who have exceeded expectations and played significant roles for their respective clubs this season.

Everton striker Dominic Calvert-Lewin finally came of age this season, almost four years after his move to the Premier League. The 23-year-old has the chief beneficiary of Carlo Ancelotti's arrival at Goodison Park and led the line to devastating effect for the Toffees.

Since the Italian's appointment in December 2019, Calvert-Lewin has recorded eight goals and an assist in the Premier League, including important strikes against Manchester United and Arsenal.

The former Sheffield United striker has been one of the most improved players of the current campaign and is reaping the rewards of having an experienced manager at the helm. Mason Mount made a massive impression on loan at Derby County last season, where he flourished under Frank Lampard. A year on, the pair have come a long way after reuniting at Stamford Bridge.

Having taken over as Chelsea manager, Lampard has continued to play a pivotal role in Mount's development as a player and the youngster has impressed with a series of eye-catching displays.

The 21-year-old is an energetic presence in the midfield and also has a keen eye for goal, having notched up six goals in his debut campaign in the Premier League.

Mount has featured in all but one league game this season and has been one of Lampard's most reliable performers in midfield, as he continues to make a name for himself as one of the most exciting talents in the country.

Sheffield United have been the surprise package of the Premier League season, thanks in no small part to Dean Henderson. The young goalkeeper, who is on loan from Manchester United, has enjoyed a stunning first season in the top flight and looks set to have a fantastic career for club and country.

The 23-year-old has adapted seamlessly to Premier League football and proved that he belongs at the top level, after making a name for himself in the Championship last season.

Henderson's assured displays between the sticks have not gone unnoticed, as the Red Devils are reportedly eager to have him back next season to compete with David de Gea.

Additionally, England manager Gareth Southgate could also call him up later this year to provide cover and competition to Jordan Pickford, who continues to divide opinion with his displays.

The young shot-stopper has been one of the best goalkeepers in the Premier League this season and looks set to have a bright future in the game. Much was said about Jack Grealish after his first Premier League campaign with Aston Villa, as they lost their status as Premier League ever-presents when they suffered relegation in the 2015-16 season.

The youngster, despite his outrageous potential, was slated for his lack of professionalism, having been penalized several times for off-field incidents. However, his return to the top-flight has been spectacular, as he continues to establish himself as a talismanic figure for Aston Villa.

Blessed with excellent close control and dribbling ability, Grealish is an attacking midfielder by trade but is also capable of playing out wide. With nine goals and eight assists to his name in all competitions this season, the 24-year-old has impressed for his boyhood side and led their battle to avoid relegation.

Grealish has been one of the best midfielders in the Premier League this season despite Villa's position on the league standings and looks set to secure a big-money move this summer.

Hailed as the greatest player he has ever coached by Pep Guardiola, Phil Foden has continued his development this season and become an integral part of the Manchester City side.

The 20-year-old is already a two-time Premier League winner and looks set to play a big part in the club's future, with David Silva primed to leave the club this summer.

An attacking midfielder by trade, Foden is blessed with a wand of a left foot and has also shown that he's got a keen eye for a pass - much like Silva himself.

The young Englishman has made 35 appearances in all competitions - 21 in the Premier League - and recorded seven goals and nine assists for the Cityzens. Foden is one of the brightest prospects in the country and is also in line to be called up to the England squad by Gareth Southgate.

Adama Traore is one of the most interesting players in world football. While the explosive winger's natural ability to take defenders on and beat them is amongst the business, he struggled for consistency in the final third till 2019.

However, in the current Premier League campaign, the former Barcelona winger as finally come of age and delivered mature performances for Wolves. Traore is lightning quick on the ball and his physique helps him maraud his way past the opposition, making him one of the hardest players to defend against.

Used as a right-winger and a wing-back in a 3-4-3, the 24-year-old has also played up front for Wolves this season and combined well with Raul Jimenez.

With six goals and 12 assists in all competitions, Traore has finally arrived in the big stage and is one of the most underrated matchwinners in the country. An unknown youngster before the start of the season, Bukayo Saka has quickly made a name for himself as one of Arsenal's finest young talents. The 18-year-old made his debut under Unai Emery but has become a key player under Mikel Arteta, as he continues to learn and grow with regular game time under his belt.

Originally a left-sided winger, Saka has filled in at left-back due to Arsenal's injury woes and has also been stationed as an attacking midfielder.

The young Englishman's versatility has ensured that he has turned out 38 times for Arsenal in all competitions this season, with four goals and 11 assists to his name.

Saka recently signed a long-term deal with the Gunners and looks set to play a pivotal role for Arteta in the coming years.

The rise of Mason Greenwood has been one of the stories of the season, as the gifted youngster continues to make waves for Manchester United.

Having started the season as an understudy to the likes of Marcus Rashford and Anthony Martial, the 18-year-old has established himself in the starting XI with a series of stunning displays in front of goal.

Greenwood made a name for himself as a prolific goalscorer for the youth teams and has adapted seamlessly to life in the Premier League. The Englishman's composure and ability to strike the ball with both feet makes him almost impossible to stop, while he has also displayed calmness beyond his age in front of goal.

The Manchester-born youngster has recorded a stunning tally of 18 goals and five assists across 45 appearances in all competitions for Manchester United and is widely regarded as one of the brightest prospects in world football.

After a series of devastating injuries, Danny Ings has finally exploded on the Premier League stage, as the Englishman is currently enjoying his most productive season in the top-flight.

Ings made his loan move from Liverpool permanent last summer and has repaid Southampton's faith in him with a series of stunning displays in front of goals. A diligent worker with a keen eye for goal, the 27-year-old's movement off the ball coupled with his predatory instincts inside the penalty area makes him so hard to defend against.

The former Burnley striker has scored 20 Premier League goals this season and is set to give Jamie Vardy a run for his money for the Golden Boot. Ings has been one of the standout players of the season and has spearheaded Southampton's push for a spot in the top half of the league standings. 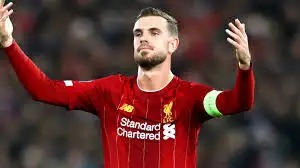 Liverpool skipper Jordan Henderson unsurprisingly tops the list for his stunning performances this season. The Englishman has been criticized by fans and players alike over the years and has been held to unreasonable standards, having succeeded the legendary Steven Gerrard as club captain.

However, Henderson has silenced his critics in some style and enjoyed his best season as a Liverpool player. Having been stationed as one of the free No. 8s in a 4-3-3, the 30-year-old has led from the front and contributed to both phases of play with incredible efficiency.

Henderson's attitude coupled with his doggedness has made him a force to be reckoned with in the centre of the park for the Reds. Additionally, the Liverpool captain's crossing ability and passing range has also been on display this season, as he played a pivotal role in the Reds' historic title victory.

The former Sunderland is set to lift the Premier League trophy this week and has turned his career around in some style under Jurgen Klopp.

What do you think about this, drop your thoughts and maybe add yours.