By kabiyesi (self media writer) | 1 year ago 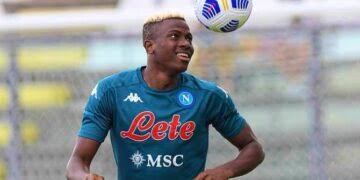 Fresh reports emanating from the Italian city of Naples has revealed that Victor Osimhen won't be leaving the club in the foreseeable future as Napoli are planning to extend the Nigerian's contract and raise his release clause to €100 million.

Italian website areanapoli.it reported that the former Lille striker was linked with a surprise move to Tottenham following reports from England that Spurs chief, Daniel Levy, is in a desperate search for Harry Kane's heir. But Napoli owner, Aurelio De Laurentis, has stated in clear terms that he will do everything possible to fend off suitors.

Towards this end, Napoli are already planning to extend Osimhen's contract by one more season and move a step further to increase his release clause to €100m.

Although the player's current contract ends in 2025, De Laurentis is not ready to easily let go of his prized asset as Napoli seek to secure a return to the UEFA Champions League after missing out on a spot at the end of this past season.

Osimhen will work under new Napoli coach Luciano Spalletti, who has also declared his readiness to unlock the Nigerian's talents and make him one of the best young strikers in the Italian Serie A.

The Super Eagles forward joined Napoli last season for €70m and was tipped to hit the ground running on arrival, but the former Wolfsburg striker could only score 10 goals due to injuries and a bout of Covid-19.

His agent William D'Avilla has also tipped the striker to rub shoulders with other top finishers in the race for the Serie A top scorers award next season.

It remains to be seen how De Laurentis intends to keep the young striker, who earns €4.5m per season, with Tottenham set to lose Kane to Manchester City in the summer