Although Barcelona hasn't been in their element since football resumed amid the coronavirus pandemic, Lionel Messi has never ceased to impress fans with his unparalleled performance. The Argentine international has scored 4 goals with 8 assists to his name one of which was a freekick goal last night. 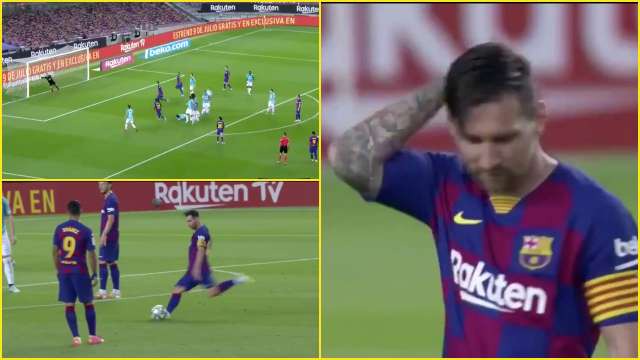 As superb as his left footed free kick goal was, frustrated Messi gathered the strength to only just raise his right arm up as his palpable downcast looks sent a bad omen to his team mates.

Despite the fact that they were many reasons for Messi to react the way he did, there was no denial that his goal was among the best La Liga had seen since the beginning of the season. Fans went online applaud him for the classical goal without causing a stir, which was in contrast with what happened after his long-term rival, Cristiano Ronaldo scored his 1st free kick goal for Juventus. There's no doubt that Ronaldo's goal was also exceptional but his fans went to far to celebrate his success, being his first free kick goal for the Italian giants. Most of them even went as far as reigning insults on Messi and his fans which was completely uncalled for.

Now, I'm not an advocate of either of them when it comes to being sincere, but I noticed that no one made a big deal out of Messi's goal compared to Ronaldo. Though I understand that the joy of Real Madrid's La Liga victory completely took the spotlight away from Messi, fans of both players should learn to appreciate them both just like the way it was after Messi's goal.

They are both ingenious players with different styles of play, and there shouldn't be any need to glorify one over another. Moreover, we've seen them respect each other in the past whenever fate brought them to play head to head, and this is something their fans should incorporate over time.