By c.nananews (self media writer) | 29 days ago The European football governing body popularly known as UEFA has celebrated Liverpool football club of England star Mohamed Salah, after reaching a milestone in his team's 3-3 draw against Brentford FC on Saturday. The former Chelsea football club star has been exceptional for the Reds since joining them from AS Roma football club of Italy few seasons ago, and he was able to impress for the club again on Saturday night.

Coach Jurgen Klopp gave the Egyptian star another starting role in his team's attack against newly promoted Brentford football club, and he was able to score a goal to rescue a point for the team. A goal each from Diogo Jota, Mohamed Salah and Curtis Jones were enough to give Liverpool football club a vital away point, despite the fact that Ethan Pinnock, Vitaly Janelt, and substitute Yoane Wissa netted for the home team. Reacting after Mohamed Salah reached a new milestone, UEFA posted on their verified Twitter handle that; 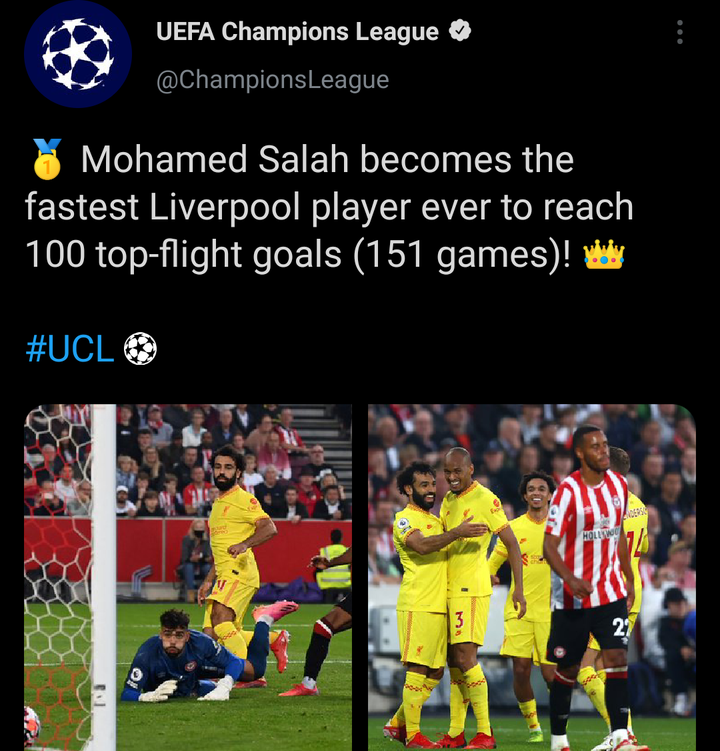 Congratulations to Mohamed Salah on his 100 English Premier League goals for Liverpool FC.