NXT TakeOver: WarGames was expected to deliver, and it did exactly that. Right from the beginning with the women's WarGames match to the main event WarGames match between The Undisputed Era and The Kings of NXT, fans were in for a treat with some amazing action.

At the same time, NXT TakeOver: WarGames was not a flawless show and there were certain aspects that could surely have been improved. We saw a new champion being crowned, a Strap match, and a technical masterpiece between Tommaso Ciampa and Timothy Thatcher.

Unfortunately, with such high-risk action, there is always a risk of someone getting injured, and the same seems to be the came tonight. Stay tuned to Sportskeeda for more updates on the possible injuries at the pay-per-view.

For now, let's take a look at the best and worst of NXT TakeOver: WarGames 2020. Be sure to let us know your thoughts and opinions of the show in the comments section below.

NXT TakeOver: WarGames 2020 kicked off with the women's WarGames match as Team Shotzi (Shotzi Blackheart, Rhea Ripley, Ember Moon, and Io Shirai) took on Team Candice (Candice LeRae, Dakota Kai, Toni Storm, and Raquel Gonzalez). In what was an intense match, the most memorable moment was  Io Shirai 's leap from the top of the cage with a trash can.

The Black and Gold brand has created some huge Superstars over the years and at NXT TakeOver: WarGames tonight and the same was done with Raquel Gonzalez, who pinned Io Shirai to win the match for her team. This happened after she put Shirai through an elevated ladder in the middle of the two rings.

Undoubtedly, that was the biggest win of the career of Raquel Gonzalez, who has impressed throughout this year with her performance. From the looks of it, she might have just become the new No. 1 contender for the NXT Women's Championship. 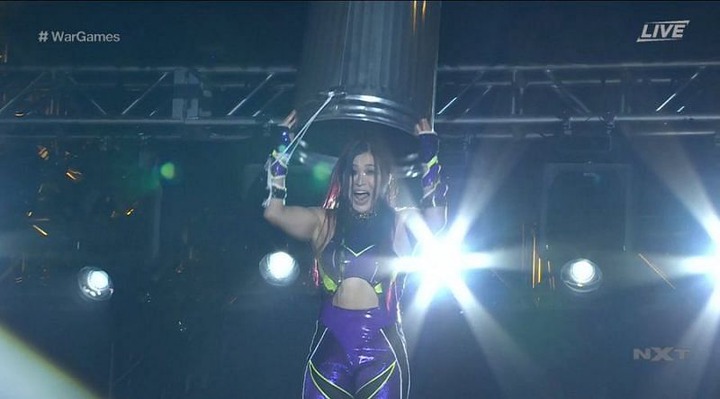 Leon Ruff  winning the NXT North American Championship last month was one of the most surprising decisions by the Black and Gold brand of WWE. At NXT TakeOver: WarGames, Ruff took on Johnny Gargano and Damian Priest in a triple threat match.

While the match was amazing with some thrilling action, the ending of the match at NXT TakeOver: WarGames saw Gargano pin Leon Ruff to end his title reign and win the North American Championship for a record third time. Of course, he was assisted by a group of 'ghost faces', the leader of whom was revealed to be Austin Theory.

Leon Ruff winning the NXT North American Championship was an amazing feel-good story but the brand could have kept the title on him a little longer. J ohnny Gargano  has achieved everything possible on NXT and he doesn't really need yet another title reign. On the other hand, Leon Ruff getting a win tonight would have solidified his babyface run. The fact that he took the pin instead of Priest adds to the problem. It is to be seen whether Ruff or Priest or both continue their feud with Gargano after NXT TakeOver: WarGames or not.