We have seen just three months of action in the 2021/22 season and amazing strikers in Europe's top 5 leagues are scoring a lot of goals for themselves and the club. Some of these strikers have shown themselves to be the most goal-scoring strikers in all of Europe so far with their great performances.

With that, let's take a look at the top striker's with the most goals in each of Europe's top 5 leagues. 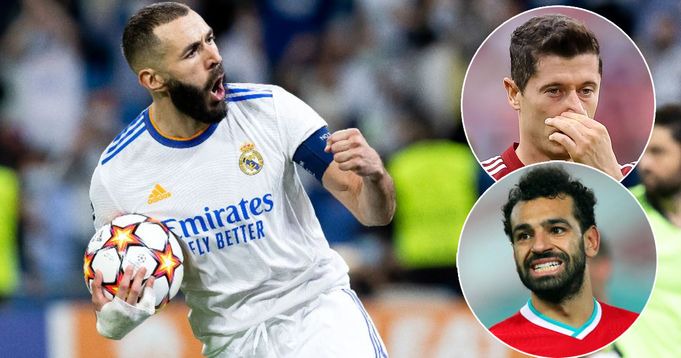 This makes him the number 1 goalscorer in the La Liga so far and his conversion rate for shots to goals is 56.25. He plays for Real Madrid.

2. Erling Haaland from Bundesliga has scored 8 goals so far this season for his Borussia Dortmund.

Erling Haaland has 4 assists after 8 match days in the season 2021/2022 and with these statistics, he now ranks number 3 in the Bundesliga. He has a total of 17 chances created.

3. Robert Lewandowski from Bundesliga has scored 7 goals so far this season for his club Bayern Munich.

As a striker, he has appeared in 7 matches this season in Bundesliga, playing a total of 577 minutes.

4. Mohamed Salah from Premier League has scored a total of 7 goals so far this season for Liverpool.

He has scored 7 times after 9 match days and this makes him the second-highest goalscorer in the Premier League so far this season. His conversion rate for shots to goals is 46.15.

5. Jamie Vardy from Premier League has scored a total of 6 goals this season for his club Leicester City.

He has played 7 matches with 9 shots on target from a total of 16 shots and has scored 6 goals.

6. Ciro Immobile from Serie A has scored 6 goals for his club Lazio. He has scored 6 times after 8 match days in the 2021/2022 season. This makes him the number 2 goalscorer in the Seria A so far. His conversion rate for shots to goals is 50.

7. Edin Dzeko from Serie A has scored 6 goals so far this season for his club Inter Milan. He has scored 6 times after 8 matchdays this season. This makes him the number 1 scorer in the Seria A so far. His conversion rate for shots to goals is 75 and he has provided 1 assist for his club.

8. Jonathan David from Ligue 1 has scored 6 goals so far this season for Lille. This season, he has played 7 matches plus 2 as a sub.