By Ernyfred (self media writer) | 25 days ago 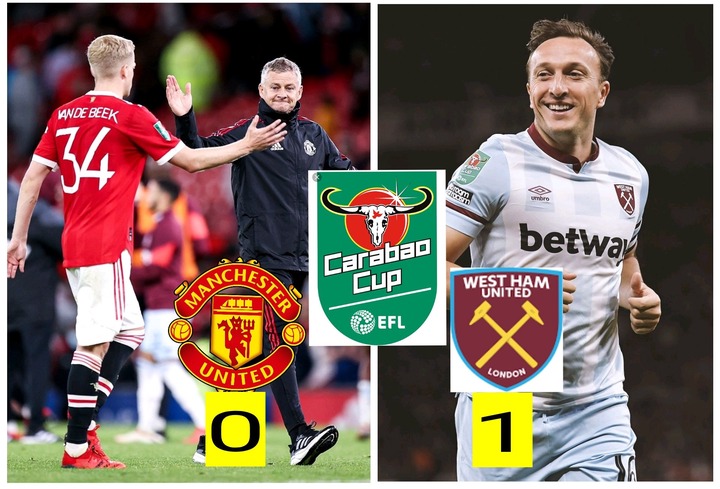 Man United hosted West Ham at Old Trafford for the third round of The EFL Cup which is also known as the Carabao Cup and lost to the visitors with a 0-1 scoreline. West Ham's 28-year-old Argentine attacking midfielder Manuel Lanzini was the player that score the club's 9th-minute goal against Man United. The Red Devils did their best to make a comeback in the match but weren't able to convert any of the six shots on target they had to goal.

This was because of the brilliant display of West Ham's 28-year-old French goalkeeper Alphonse Areola who put up a man-of-the-match performance for his club.

The Defeat caused Manchester United's early exit from the knockout stages of the English football competition that is Organized yearly for the top four divisions clubs in England's men's domestic football leagues.

One way Manchester United's early exit from the EFL Cup competition might benefit the club; Though it's disappointing that Man United suffered an early exit from the Carabao Cup competition, there's a positive side to the update.

With EFL Cup competition matches out of United's fixtures for the season, the Red Devils now have enough time and energy to compete for major tournament trophies like the English Premier League title and the UEFA Champions League title.

This gives them an advantage over their domestic league rivals Chelsea, Liverpool, and Man City who have to bother about rotating their players through tedious match fixtures for the season, including the EFL Cup fixtures which are now off Man United's list.