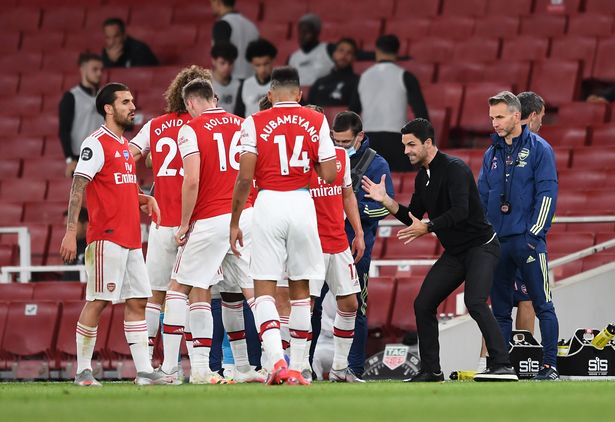 Mikel Arteta has no chance of getting the money he needs out of Arsenal.

They could spend £200m and still not make the Champions League next season because the gap is so big.

They need a centre-back, a centra midfielder and another striker. The whole spine of the team really.

And I think he might go for John Stones at Manchester City. Pep Guardiola doesn’t seem to trust him, and Arteta has worked with him before.

Arsenal need an out and out defender, not another David Luiz who knows how to play the ball out from the back but makes a lot of mistakes.

But Stones is English, young enough to improve, and Arteta will know all about him and know he fits into the system.

Arsenal beat Liverpool this week but how may chances did Jurgen Klopp’s have? They won the game because of a couple of mistakes.

You don’t normally see Virgil Van Dijk and Alisson making mistakes like that and I expect City to beat them in the FA Cup semi final.

Arsenal have a chance because it’s a one-off game and anything can happen. If they defend like they did against Liverpool it could get interesting.

But that’s the thing with Arsenal, you can’t rely on them to play with any consistency and they would have to get massively lucky to get to the final.

Arteta said himself the gap to the top two is enormous and he’s dead right. Arsenal are a million miles away.

If you look at the quality of City versus Liverpool and the North London Derby, it’s chalk and cheese really.

And with the squad City have, they have to be favourites to win the FA Cup. If they’re in trouble they can bring on five top class subs!

From the latest transfer news to the agenda-setting stories, get it all in your email inbox.

Put your email in the box at the top of this article or you can follow instructions on this link here.

Arsenal and Tottenham are sweating on a top four finish these days. And I don’t know how that gap’s going to close.

I think it’s huge. If you’re the board at Arsenal, the problem is how much money to throw at it. They are so far behind even £200m might not be enough.

Then there’s Mesut Ozil’s wages to get off the books. They might end up having to pay him just to leave.

And Pierre-Emerick Aubameyang needs a new contract that won’t come cheap. He’s already in his 30s but Arsenal can’t afford to lose him.

That’s a lot of money gone already. And I know Arsenal. I played there. Arsenal don’t gamble with their money.

They don’t take big risks in the transfer market. It’s not their way. Arteta must know that - but if you don’t ask, you don’t get I suppose.

They won’t want to miss out on the FA Cup as well, and it sets up the prospect of a mouthwatering all-Manchester final if United can get there.

I give Chelsea a big chance in that one but an all-Manchester final would be a fun watch - and United have the attacking players do hurt City too.

Virgil van Dijk is still the Player of the Year for me even though he had an off night against Arsenal.

People tell me Kevin De Bruyne is the favourite but it beats me how that’s possible.

On form De Bruyne is probably the best player in the world right now. But so was Raheem Sterling back in September.

It’s all about timing. Being great now, when the title race is over and the pressure is off, is not a massive achievement.

And I don’t know how you could possibly win Player of the Year when your team is so far behind the champions.

Van Dijk is one of the best defenders in the world and he has taken Liverpool to another level.

He has 100 per cent been the difference this year for them and they have won their first title in 30 years by destroying the competition.

That’s why he should get the Player of the Year award.

They’ve looked off the pace ever since the restart and I think they’re going to miss out on the Champions League now.

Leicester have a small squad and they’ve had a few injuries. They really miss James Maddison.

They are still in the race but it’s taken it’s toll and I can’t think of a much harder run-in for them.

It’s still going to be one of their highest finishes ever in league football so you can’t be too critical.

But I don’t think they came back from lockdown fully charged. Maybe some of their players didn’t stick to the fitness programme.

The buzz has not been there and they’ve struggled. I just look at it as fitness levels. They haven’t got going at all.

It would be a shame for them if they miss out because Brendan Rodgers has done a great job there. But lockdown came at the worst possible time for them.