Arsenal football club star Thomas Partey has become the first Ghanaian player to score an English Premier League goal for the club, after netting a goal in their 3-1 victory over Aston Villa FC at Emirates Stadium on Friday night. The 28 years old was signed by Arsenal football club from Spanish Laliga Champions Atletico Madrid football club last season, and he was unable to score a goal for the team in his 24 appearances in the 2020/2021 season.

The former Almeria football club star struggled with injuries last season, but he has been superb for the Gunnars since the beginning of the 2021/2022 season, and he has been able to attempt 49 shots for Gunners, before his hard work eventually gave him his first ever goal for the club. Partey was given another starting role by coach Mikel Arteta following his outstanding performance for the club in their previous matches, and he was able to play a vital role in their deserved victory.

Goals from Thomas Partey, Pierre-Emerick Aubameyang and Emile Smith-Rowe were enough to give the Gunners a well deserved victory, despite the fact that Jacob Ramsey netted a consolation goal for the away team towards the end of the game. With Thomas Partey's first half strike, it means he has become the first ever Ghanaian player to score an English Premier League goal for Arsenal football club;

"Thomas Partey is the first Ghanaian player in the competition’s history to score a Premier League goal for Arsenal." 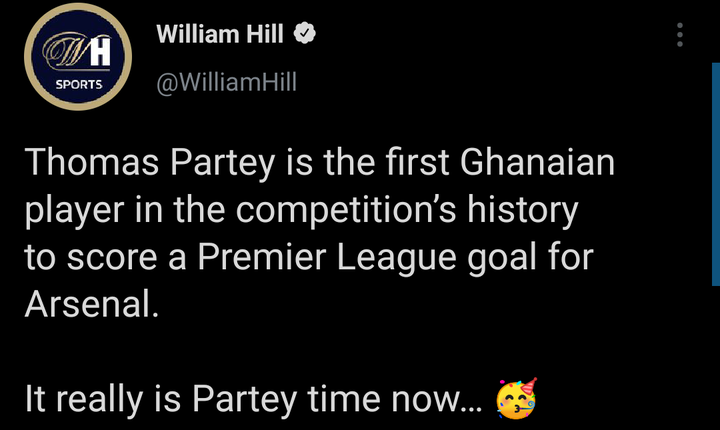 "Thomas Partey is the first Arsenal player to score past Emiliano Martinez since he left the club. He had kept clean sheets in his two previous games against the Gunners."

Thomas Partey will now be looking forward to building on his excellent performance against Aston Villa football club when Arsenal FC play their next League game.