WWE has announced a segment for next week's episode of SmackDown. WWE Universal Champion Roman Reigns will confront the new No. 1 contender for the title, Adam Pearce.

As reported by Wresting Inc, WWE announced the segment in an advertisement that aired during NFL coverage of the Seattle Seahawks and Los Angeles Rams game on FOX. 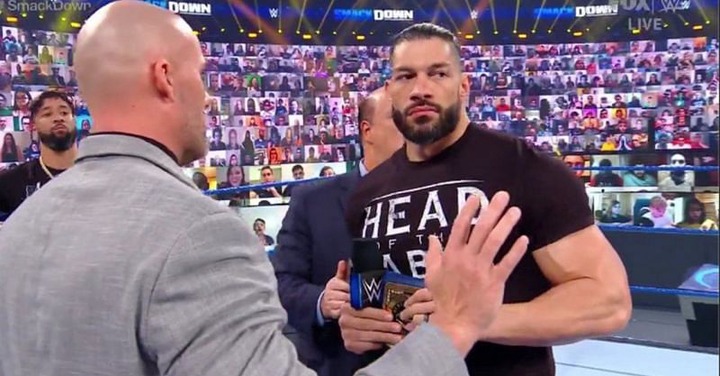 The announcement follows the previous episode of SmackDown, where WWE official Adam Pearce shocked the world. "He" beat Shinsuke Nakamura in a gauntlet match to become the No. 1 contender to Roman Reigns' WWE Universal Championship. Granted, Pearce was forced into the match after Paul Heyman pulled some strings backstage.

The Head of the Table and his entourage made sure Pearce came out on top after entering the ring and laying a beatdown on an already exhausted Shinsuke Nakamura.

They then made Adam Pearce cover Nakamura for the three count. This all went down after Reigns called out Pearce for continuously booking matches that saw his family go against Kevin Owens over the past couple of weeks.

Roman Reigns truly is the Head of the Table

Roman Reigns has become a completely different person since the start of his heel run, and since he enlisted the services of Paul Heyman. His promos have been smooth and well-delivered, his work in the ring has been malicious and calculated, and overall, he is probably the best heel in WWE right now.

The Tribal Chief has been getting things his way for some time now and will continue to do so in the coming weeks. Roman Reigns is definitely feeling good about how things transpired this week.

We will see what the Universal Champion has to say to his upcoming opponent on next week's SmackDown. Not much is expected from his challenger, Adam Pearce, but hopefully, Roman will go easy on him.

That being said, there is still a small chance that Pearce may come out on top. Do you think Adam Pearce will become the next WWE Universal Champion? Let us know down below.