Arsenal’s defensive woes were well exposed through the course of the season. So, it is of little surprise that they are desperate to have new recruitments at the back and have been linked with a number of defenders in recent times. According to reports Gunners are interested in Malang Sarr, who is a free agent after his contract expired with Nice this summer.

With the Covid-190 affecting financial status of the club, a free transfer of a young defender is something every club dreams. Though Arsenal have held talks with the France Under-21 international, as per reports in Goal, they are yet to make an official offer for Malang Sarr who has been on the radar of many clubs.

The young 21-year-old came through, the Nice academy and has made 119 appearance for them. A strong defender who can play either as a centre-back or slot in the left-back position, Sarr has played 19 times this season. While Arsenal are yet to make any concrete offers, Torino are in a more advanced position to lure the player. 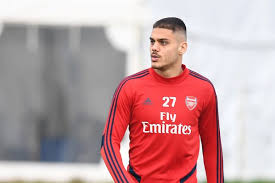 While the speculations regarding a new defender goes on, the north London club are set to lose another in Konstantinos Mavropanos. The 22-year-old spent the latter half of the previous campaign ,on loan at Nurnberg, making 12 appearances in Bundesliga’s second tier.

Many top tier German sides were interested in him but he chose to join Stuttgart thanks mainly to their sporting director Sven Mislintat. Mislintat also brought the Greece international to the Emirates back in his time as Arsenal’s head of recruitment. He has made just eight appearances for the club till now, but keeping in mind his age and his improvement in recent times, the club is happy to keep hold of him. He signed a new contract at Arsenal, before making a season long loan switch to the newly promoted German side. Do you think Malang Sarr ,will be a good addition to Arsenal? Share your thoughts below.