EPL: How The Top Four Battle Would Likely End

By Baba_tunde (self media writer) | 2 years ago 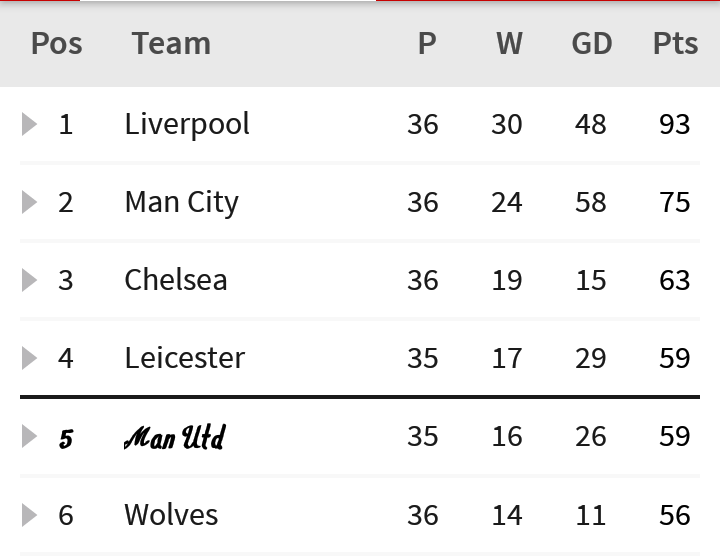 Since the return to the game, after a long absence due to the pandemic, the English Premier League football has been filled with so many dramas.

With just two slots remaining to complete the four teams that will play the UEFA Champions league football next season, Chelsea, Leicester, Manchester United and Wolves are now in a battle to the finish. The already qualified teams are Liverpool and Man City. Liverpool (Champions) occupies the first position on the log, while Manchester City sits at second.

To level up with Chelsea and Wolves in the number of games played, Man Utd and Leicester will take on their various opponents later this evening. Leicester City will take on Sheffield United at home, while Manchester United travel to Crystal Palace.

However, going into the games, Manchester United and Leicester will play with everything in them to make sure they come out victorious, in order not to cut loose from the top four battle. And whatever becomes the outcome of their games today, it won't affect how they play the remaining two games, as getting the maximum points from the games will speak volume for all the teams.

So, what would become the end of this battle? Which teams among the four would play in the Champions Leagues next season?

To give a predictive answer to these questions, let us consider the remaining fixtures of all the for teams involved in the top four battle. And afterwards, we can make a prediction on which teams would play in the Champions League next season and which teams would not.

From the various teams' fixtures, it can be deduced that Chelsea and Leicester have the toughest games to play. However, the games between Chelsea and Liverpool, Chelsea and Wolves, and Leicester and Man Utd will play a great deal in determining how the top four battle would end.

To me, with the remaining fixtures of the various teams, and judging by their current run of forms, I see Manchester United finishing 3rd and Chelsea, 4th. Leicester and Wolves would probably end up playing the Europa league next season.

Or, how would you predict the top four finish?