Paul Onuachu Nominated Alongside 4 Others for Ebony Shoe Award

By ExclusiveSports (self media writer) | 8 months ago

Red-hot Nigerian Paul Onuachu is on the news again after winning the Belgian Pro League footballer of the year award. He has been nominated for the Ebony Shoe award. Other nominees are Theo Bongonda Mbul'Ofeko Batomboat, Clinton Mukoni Mata Pedro Lourenco, Lukas Nmecha, and Albert-Mboyo Sambi Lonkonga.

The Ebony Shoe award is a football award in Belgium given annually to the best African or African origin player in the Belgian Pro League. It was dominated by Nigerian players in the first five awards with Daniel Amokachi, Victor Ikpeba, Godwin Okpara, and Celestine Babayaro winning it. Daniel Amokachi Is the only Nigerian player that has won it twice. He won the inaugural edition in 1992 and the third edition in 1994. Then he played for Club Brugge and Charleroi respectively. 1993 which was the second edition remains the year Nigerian players dominated the award. Then the Nigerian trio of Victor Ikpeba, Chidi Nwanu and Daniel Amokachi won the gold, silver and bronze medal.

Since then it has been the Congolese that predominated it. The East African country has produced players that have won it on eleven occasions making Nigeria the second most successful country in the Ebony Shoe award.

The last time a Nigerian player came closer to clinch was in the year 2015 when Moses Simon grabbed the silver medal. He was only bettered by Neeskens Kebano of DR Congo who clinched the award.

Should Paul Onuachu win the award, he would be fifth Nigerian to win it and it would be the sixth time Nigerian players are winning it. Another Nigerian, Lukas Nmecha is also in the race. He is a Germany U21 International. Should both Onuachu and Nmecha occupy the first and the second place, history will repeat itself as was the case in 1995 when Godwin Okpara and Celestine Babayaro won it. 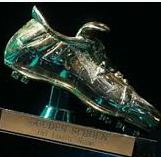 Content created and supplied by: ExclusiveSports (via Opera News )