How the Premier League table, top scorers and clean sheets charts look after the Saturday games

By SportsBible (self media writer) | 23 days ago 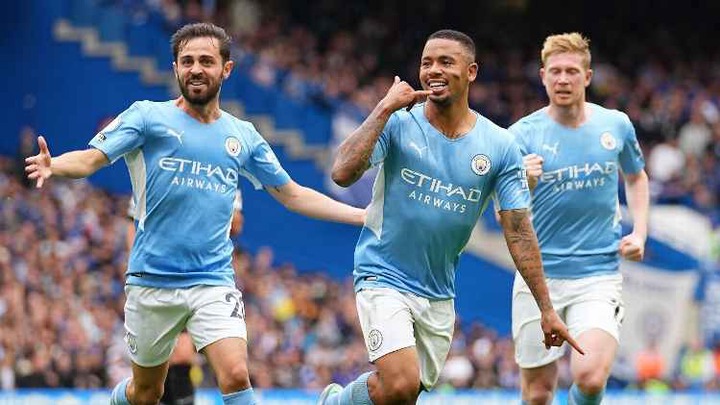 In a strange weekend in which Manchester City was the only major title contender that won, Liverpool has managed to climb to the top of the Premier League table despite their 3-3 draw with Brentford. They will be there until Monday at least as all other title challengers have played except Brighton who began the season well.

Due to last season's poor performance, the Reds were not the outright favourites for the title at the beginning of this season. It appears they are benefiting from going under the radar as there is no added pressure.

One team that is currently in the top 4 but may not be there by the end of the game week is Manchester United. The Red Devils lost 1-0 to Aston Villa under controversial circumstances. 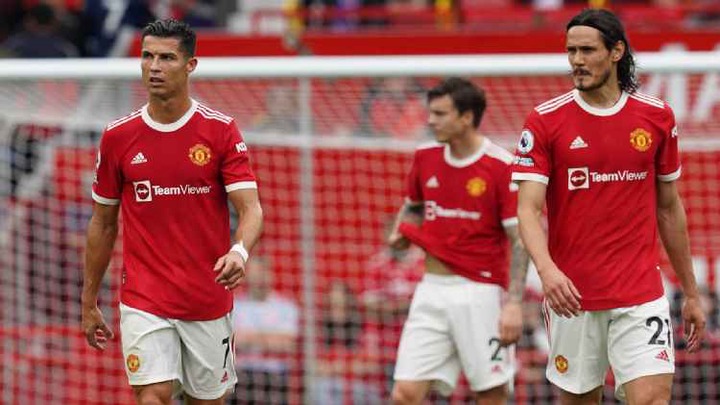 They are currently 4th in the league table but may go down to 5th if Brighton beats Crystal Palace on Monday. The Seagulls will go as high as first if that happens but a draw will see them remain 6th In the table due to their poor goal difference.

At the bottom end of the table, Norwich who was bottom coming into game week 6 remain there after losing 2-0 to Everton.

Burnley got a point after their 2-2 draw with Leicester City but it's not enough to get them out of the bottom 3. They will remain 19th until game week 7 at least.

Leeds United started the game week outside the relegation zone but they currently find themselves in that position after losing 2-1 to West Ham as Newcastle United got a point after they drew 1-1 with Watford.

Below is the Premier League table 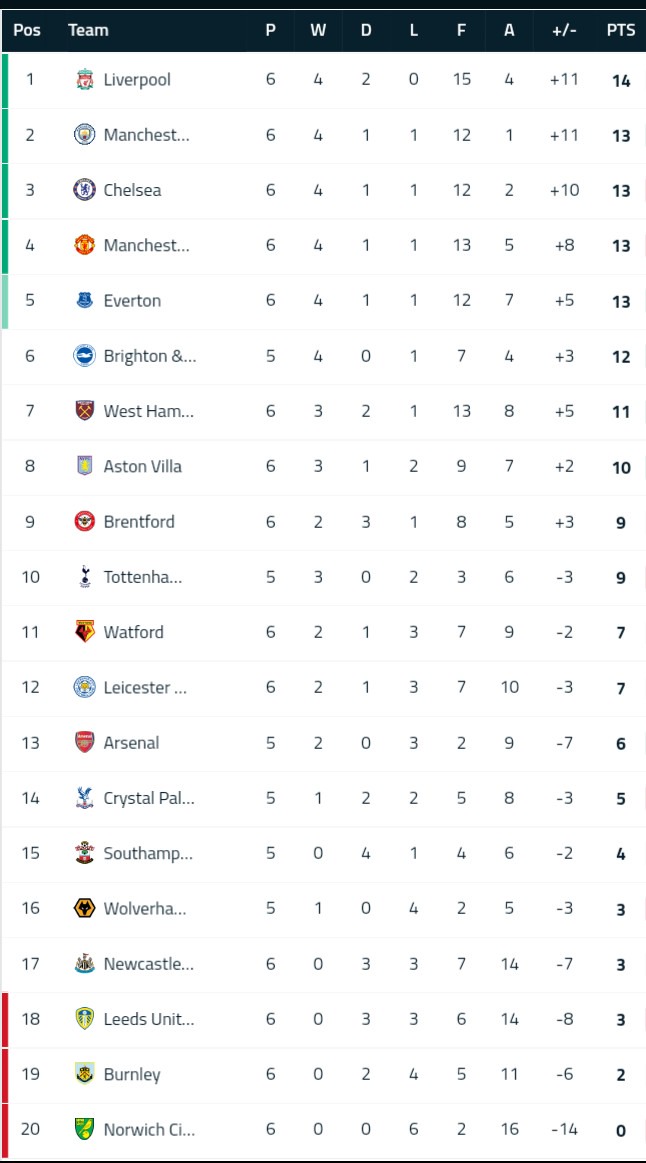 As it stands, Michail Antonio, Mohamed Salah, and Jamie Vardy are joint top scorers as all 3 have scored 5 goals each. The West Ham and Liverpool forwards have been at the top of the chart since the beginning of the season while the Leicester striker got there after scoring 2 goals against Burnley this weekend. Cristiano Ronaldo and Romelu Lukaku are further down the table after not adding to their respective 3 goals this weekend. 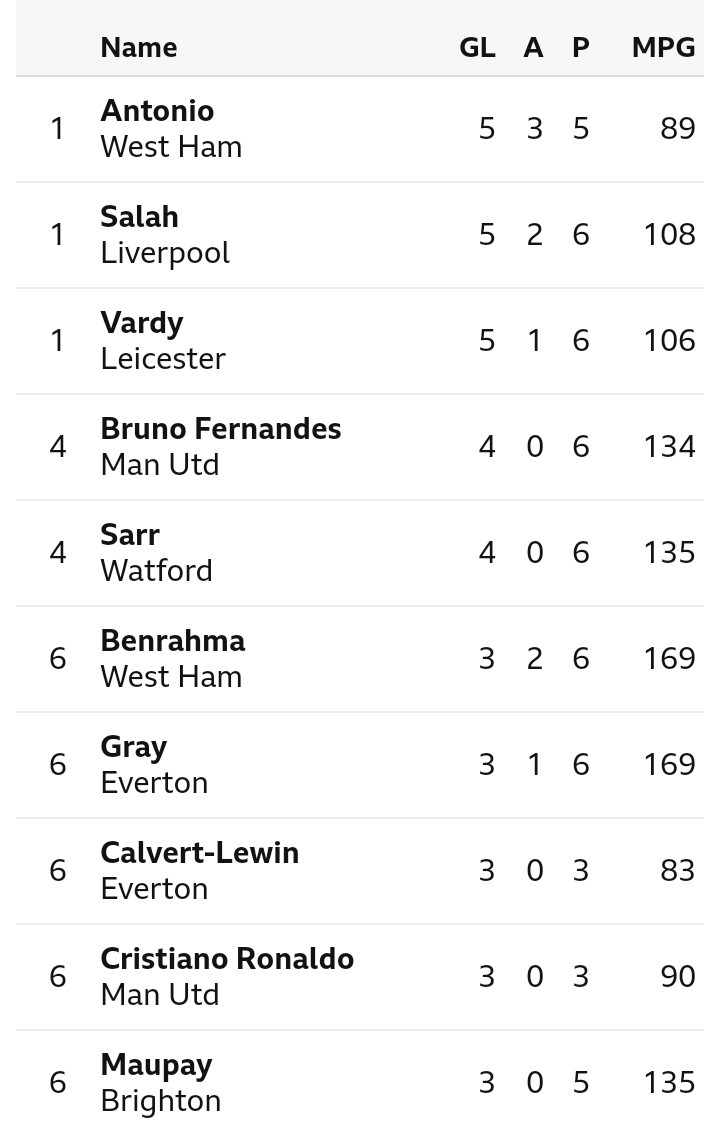 Out of the 14 goalkeepers that were in action on Saturday, Ederson Moraes, Emiliano Martinez, and Jordan Pickford were the ones that managed to keep a clean sheet. That leaves the 3 goalkeepers first, seventh, and ninth respectively on the clean sheet chart.

The Manchester City goalkeeper has kept 5 clean sheets so far this season, while the other two goalkeepers have kept 2 clean sheets each. Liverpool's Alisson Becker and Chelsea's Edouard Mendy are second and third respectively on the chart.

Here are the current top 8 goalkeepers on the chart 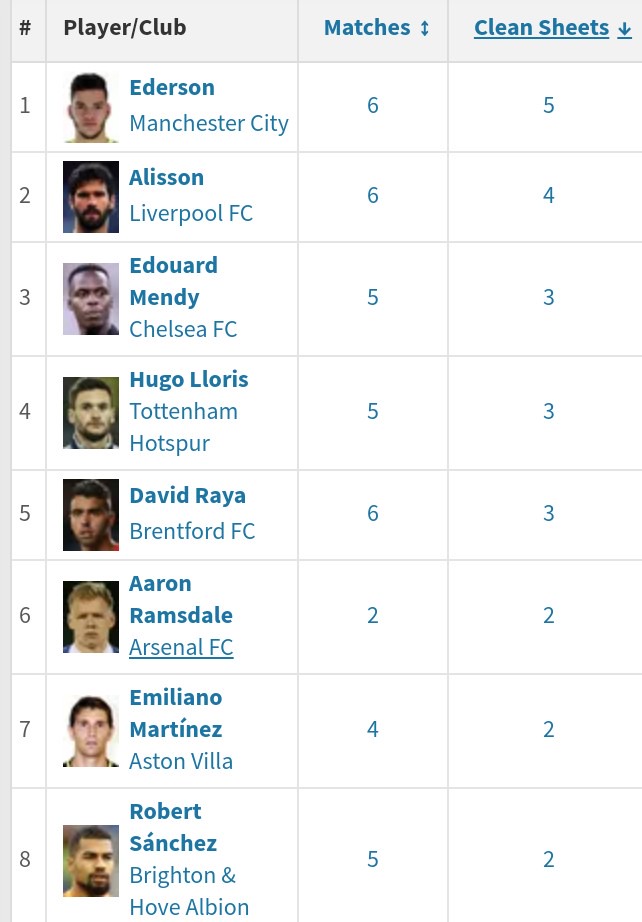