By Steadyupdate (self media writer) | 1 year ago

Micheal Jordan is the greatest basketball player of all time. He was integral in helping to popularize the NBA around the world in the 1980s and 1990s , becoming a global cultural icon in the process. Michael Jordan was born in the year 1963 February 17. His an American. His leaping ability, demonstrated by performing slam dunk from the free throw line in slam dunk contest,earned him the nickname "Air Jordan" and " his Airness". Michael Jordan won his first NBA championship with the bulls in 1991,and followed that achievement with title in 1992 and 1993, securing a "three- peat". Jordan abruptly retired form basketball before the 1993-94 NBA season to play minor league baseball, but returned to the bulls in March. 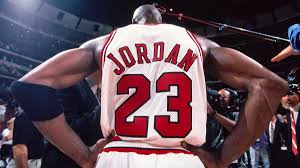 Content created and supplied by: Steadyupdate (via Opera News )