By OlokeO (self media writer) | 9 months ago

Paris Saint Germain (PSG) are set to host Man City in the UEFA Champions League (UCL) semi-final first leg on Wednesday at the Parc des Princes. It's crunch time as the boys are separated from men in the Holy Grail of European football. 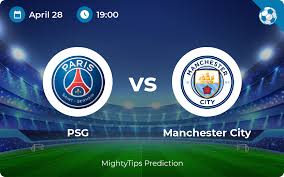 The clash promises to be mouthwatering fixture with firepower on display on both sides. PSG want to take a bit at the cherry after last term's heartbreak of losing to eventual winners Bayern Munich thanks to a 1-0 loss at Lisbon. This season they have taken their pound of flesh in their quarterfinal stage against the Bavarian side.

Here are four reasons why the Parisians will beat Man City in this epic clash.

1. Mbappe Is A Time Bomb Ready To Explode

The French strike is in a rich vein of fine form. He has scored in three of the last four UCL fixtures this term. The youngster delivered a hat trick against Spanish giants Barcelona at the Camp Nou and one more goal in the second leg of the round of 16 from the spot.

Then, against Bavarian giants, Bayern Munich at the Allianz Arena fortress, he scored another two. That means that six of his last eight goals in the Champions League have come in the knockout rounds. The hotshot has recorded haul of 25 goals in the Ligue 1 and 8 goals in the UCL this term. On a good day the Frenchman can breakdown any defence.

2. The Parisians Are Baying For Blood

Mauricio Pochettino's tutored team will try to reach what would be their second consecutive UCL final. Last year's final loss is still fresh on the mind of the Parisians and this term's campaign represents a fresh opportunity to take a shot at carting home the big ear trophy.

Last year, they suffered disappointment in the UCL final at Lisbon, who came away with a 1-0 victory courtesy of former PSG alumni Kingsley Coman.

PSG will look to round up affairs from the first leg with a comfortable scoreline. Man City are in the eye of the storm as the Qatari backed Parisians are looking to cart home the biggest prize in European football.

4. Navas Is A Rock of Gilbraltar

Costa Rica goaltender Keylor Navas is plus to any side with an enviable record of three UCL titles with Real Madrid. The experience he brings to the table is rich and it will count against Man City tonight. He boasts a record of 13 clean sheets in the 25 matches he has played this term. This complement is an advantage to Pochettino's side as they lock horns against illustrious opponents from Manchester.

PSG (2-0) Man City - The Parisians will come out guns blazing and City won't have an answer to counter this threat tonight at the Parc des Princes. The clock is ticking and time will tell where the pendulum will swing.