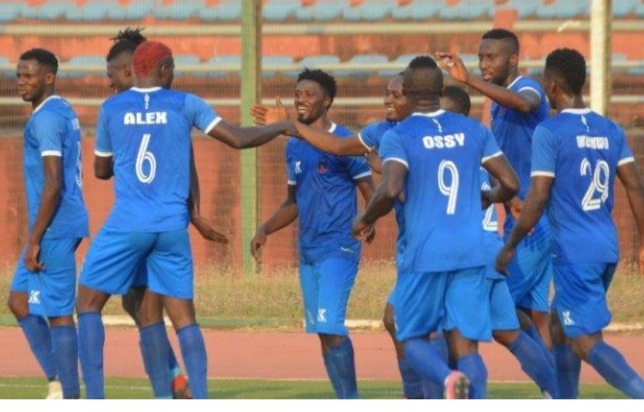 Rivers United remained fourth on the log despite trouncing Plateau United 3-1 at Yakubu Gowon Stadium in Port Harcourt. Godwin Aguda opened the scoring for the home team from the spot on three minutes, Malachi Ohawume made it 2-0 on 33 minutes while Shedrack Oghali scored the third goal on 56 minutes before

Andrew Evans Ikefe pulled one back for the visitors 15 minutes from regulation time.

Lobi Stars were 3-0 victorious against visiting Heartland at Aper Aku Stadium in Makurdi, with a brace from Ossy Martins, who scored on 49 and 90 minutes while Monday Alike netted betwixt on 61 minutes.

Despite the win, Lobi remain in eight position with 46 points, seven points adrift of leaders Akwa United, who have a game in hand.

In an Oriental derby at Nnamdi Azikiwe Stadium in Enugu, Rangers edged Abia Warriors 2-1, taking their point haul to 49, but stay seventh on log.

Hammed Yakub fired the visitors in front on 43 minutes while Christian Nnaji and Kenechukwu Agu scored on 52 and 90 minutes respectively, to hand the Flying Antelope a crucial win. The result saw Abia Warriors drop from 13th to 14th on the log.

MFM edged Kano Pillars 2-1 at Agege Township Stadium in Lagos without the visitors enjoying usual support of the Hausa community in Lagos.Tosin Olubola put the home team in front on 17 minutes, Namji Adeyinka made it 2-0 on 64 minutes while Rabiu Ali pulled one back for Pillars from the spot in added time, after losing a penalty on 80 minutes.

The most surprising result on the day was in Aba, where Enyimba forced Warri Wolves to 1-1 draw, with both goals coming late in the match. David Chimezie put the visitors ahead on 72 minutes before Austin Oladapo saved the home team's blushes six minutes later.

Sunshine kept their feet on gas, edging Wikki Tourist 1-0 at Akure Township Stadium via Faud Ekeleojuti's 54 minutes goal, as they recorded their seventh win of the campaign to stay 18th on the log.

Katsina United recorded the only away win on the day, with Josepe Junior Atule's 32 minutes goal handing them maximum point at Ahmadu Bello Stadium in Kaduna. The win saw the visitors move from 15th to 23th on the log.

The remaining two fixtures of the round will be played in Akwa Ibom State on Thursday, July 1. Dakkada will entertain Kwara United while leaders Akwa United will host Nasarawa United at Godswill Akpabio International Stadium in Uyo.