A Moroccan-Egyptian struggle over the title of "African Champions"

A Moroccan-Egyptian struggle over the title of "African Champions" ... the beginning with the "Red Summit" 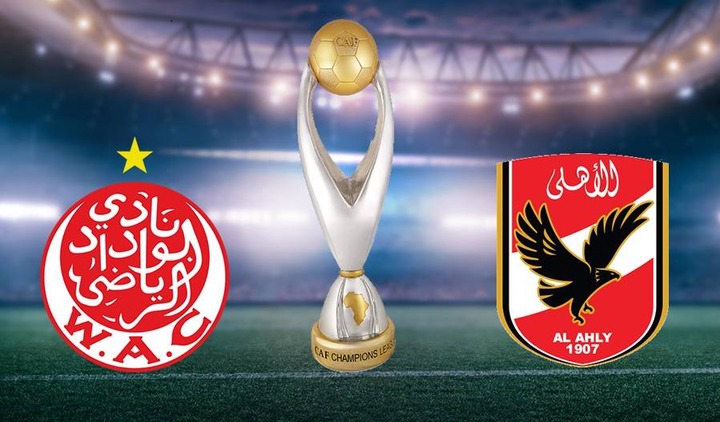 African football competitions are reviving their activity on the impact of two Moroccan-Egyptian summits in the first leg of the Champions League semi-finals.

The matches will be held on Saturday and Sunday at Mohammed V Stadium in the economic capital of Morocco, Casablanca, after the competition was suspended seven months ago due to the spread of the new Corona virus, which led to the imposition of a ban on movement between African countries that closed their borders to limit the spread of the pandemic.

Wydad was close to its third title last season, but lost the final to Tunisia's Esperance after withdrawing in the second leg due to a problem with VAR.

Assistant coach Tariq Shihab said: "The match against Al-Ahly has a special flavor, as it brings together two ancient African teams, and their meetings have always been filled with the big clubs."

"Our preparations were intense, as we paid attention to the physical and technical aspects ... We hope to achieve what we aspire to without ignoring the small parts that make up the difference in such competitions ... We will try to settle matters in Casablanca."

Argentine Wydad is supervised by Miguel Gamunde, trying to save his season, after losing the local league title to the eternal rivals Raja, by a point difference in the last moments of the decisive round last Sunday.

Gamunde is counting on a strong squad led by international goalkeeper Ahmed Reda Al-Teknouti and Abdel-Latif Naseer, as well as midfield activist Walid Al-Karti with Ayman Al-Hassouni and Salah Al-Din Al-Saeedi. As for the striking forces, they lie in the forward line led by the Democratic Congolese, Kazadi Kasengo, supported by the two wings, Badie Awok and Ismail Al-Haddad.

On the other hand, Al-Ahly, who holds the record with eight titles, enters the last in 2013, the meeting led by South African coach Pitso Mosimane, substitute for Swiss Rene Fyler two weeks ago.

Musimani is counting on continental experience after previously crowning Mamelodi Sundowns in 2016 at the expense of Zamalek. However, the team is missing the injured defenders Mahmoud Metwally, Rami Rabia, and the two talents of Al Wasat, Karim Nadved and Mohamed Mahmoud.

Offensively, Al-Ahly misses the star Ramadan Subhi, who is moving to Pyramids, and most likely Mahmoud Abdel-Moneim, "Electricity", was injured despite his presence in Casablanca.

The South African is counting on goalkeeper Mohamed El Shennawi, who is returning from injury, in addition to the experience of Tunisian full-back Ali Maaloul and the brilliance of midfield trio Amr Al-Sulayyah, Hamdi Fathi and Mali Aliyu Diang.

In the second match on the same stadium, both Raja and Zamalek hope to break their fast of the title, as the Moroccan team was crowned three times, the last of which was in 1999, and Zamalek five times, most recently in 2002. The

"Green Eagle" enters the meeting boasting of being crowned the league title after an absence of seven years, He hopes to win a rare hat-trick this season by adding the continental title and the Arab Clubs Cup title.

Raja coach Jamal Al-Salami shows great confidence in his members, despite the absence of Hamid Ahaddad on loan from Zamalek specifically because of a clause in his contract between the two clubs.

Al-Salami also misses his most prominent defensive element, Abd al-Rahim al-Shakir, Abdul-Jalil Jabirah, and al-Libi Sanad al-Werfalli, and some of the players who contributed to the victory of the local title are not registered in the African list.

He is counting on goalkeeper Anas Al-Zuniti and defender Badr Bannon, who is likely to move to Al-Ahly, and "Maestro" Mohsen Metwally and the Congolese Democratic striker Ben Malango to Elias Al-Haddad, Mahmoud Benhalib and Abdel-Ilah Al-Hafizi.

As for Zamalek, he will enter the match, with a view to returning with a positive result. However, in contrast to the technical stability he is experiencing under the leadership of his new Portuguese coach, Jaime Pacheco, the "White Castle" is currently living under the weight of an administrative and legal problem after the Egyptian Olympic Committee decided to suspend the club's president, Mortada Mansour, for four years due to the defamation and defamation lawsuits against him by a number of sports and football authorities. Al-Ahly president Mahmoud Al-Khatib.

However, Pacheco, who leads Zamalek for a second time in his career, sought to distance the team from these matters and closed training at the Wydad club.

He said after his appointment, "I came back because I love Zamalek, and I aim to win the Champions League."

Bashiko has an exemplary squad that won the African Super Cup and the Egyptian Super Cup, led by defender "top scorer" Mahmoud Alaa, star focus Tariq Hamed and young scorer Mostafa Mohamed, as well as Moroccans Ashraf Bencharki and Mohamed Onajem, who won the title with Wydad three years ago.

It also includes Tunisian Ferjani Sassi, who joined the mission late to refute rumors of his escape, and the Congolese Democratic Kabongo Kasungu, who was deported with former French coach Patrice Carteron. The team's weak point is the absence of the main backs, leader Hazem Emam and Mohamed Abdel Shafi.