Top 5 Chelsea academy players to watch out for next season

For long time now Chelsea has been struggling for ignoring the talent it's academy has been producing. The blues academy is one of the most prestigious academies in Europe, which is a star-studded camp.

But the talents produced by the academy don't always got the opportunity to break into the first-team owing to Chelsea short sighted approach. But all that comes to an end this season as Chelsea gives former player Frank lampard the managerial role. With the ban at hand then and lampard's love for young players opens door to many of these academy player to display their talents, since Chelsea was ban from signing any player in the transfer window, Lampard has to use the academy players to fortified the team bringing in players like Tammy Abraham, Mason Mount, Fikayo Tomori, Recce James and Callum hudson-odoi. Of which all of them did excellently well.

So, here in this article we'll take a look at five more youth players who could break into the first team anytime soon. After Chelsea succeeded in sending Mason Mount on loan to championship. Inorder for him to develop of which it yield positive results for the blues. Chelsea also did the same in the case of Gallagher by sending him on loan to Charlton ahead of the beginning of the season.

The youngster has to move to lower division after he was crowned as the blue's academy player of the year for last season.

On getting to Charlton he put on a fine performance as he won the EFL young player of the month prior to his three goals in six appearances. He was later recalled by Chelsea and was sent on loan again to Swansea.and he has lived upto the task with his display for the Welsh side.

Gallagher might be given the chance to impress Lampard next season. Over the years now the blues academy has produced several talented attackers. But since the pathway to the first team seems blocked before now, has seen many of this player look elsewhere for playing opportunities. Prior to the arrival of Lampard as coach he has given green light to the academy players to break into the first team.

And most of this players have now commit their future to the club, as Lampard bring in Tammy Abraham and made him a regular starter in the first team he could do the same with Armando Broja. The 18 year old could likely be given chance next season as he has been training with the squad on several occasions. 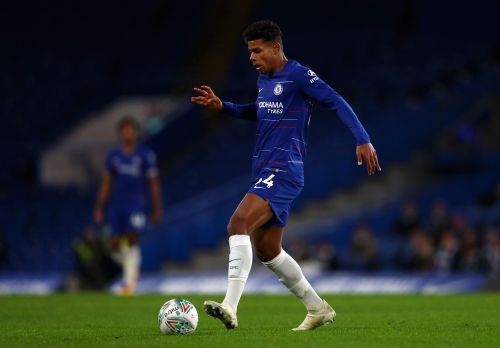 The 18 year old Anjorin is one of the best players in the academy right now. He joined the club when he was just seven and he make his debut against Grimsby as a substitute in a FA cup match this season. And with the few minutes he was given he showed how excellent and how perfect he was for the first team squad.

Anjorin has done exceptionally well in the youth level as a defender, and it'll be no surprise if we see him break into the first team soon. Anybody who has seen the playing style of Billy Gilmour will conclude that there something great to come from him.

The Scottish holding midfielder has always put on a fine performances whenever he steps into the pitch to play either starting or as a substitute. Gilmour has progressed through the ranks after joining from rangers in 2017. And head coach Frank lampard seems to be interested in the services of the youngster.

He is currently the best placed academy player to break into the first team. His composure and calmness in the middle along with his passing range makes him the perfect deputy to Jorginho. The Dutchman was sent to play for few minutes against Grimsby in FA cup match after putting on a fine performance and display at the youth level. And fans could possibly deduce how wonderful the kid was.

Maatsen who was a 17 year old defender joined Chelsea from feyenoord in 2018, and he was rated high as many big clubs were after him. Sequel to this season Maatsen has thrived as a left back and could also do well at going forward as well.

Maatsen has the chance of breaking through into the first team next season considering the inconsistency of both Emerson and Alonso.