"I Was A Street Boy", Kanu Nwankwo Shares A Passionate Story Of How His Career Began

By Chuksogbu (self media writer) | 1 year ago

I was born in Owerri and grew up in the east of Nigeria, in Imo state. You could say I was a "street boy": we grew up on the street, played on the street, did everything out on the street. It was a difficult life altogether, but that's how we grew up. My dad was a civil servant before he retired and my mum worked, too. We could not always get three meals in a day; sometimes we'd struggle.

But we always had soccer: something that everybody loves. It pulls the whole country together, something that can bring peace and unity to Nigeria. When there's a World Cup or Africa Cup of Nations, every­ body's into it: young and old, rich and poor. It's like a festival going on, everybody wanting the Super Eagles to win.

When you're growing up, you have your heroes and you hear about people going off to other countries to play football but, when you're so young, you're not thinking about that. You just play. No referee, no rules. And when I say we played in the street, I mean in the road, with cars going past. We would just put things down to make goalposts and play with a rubber ball. If you were lucky, it might be like a tennis ball; something perfectly round. But often the ball wouldn't be like that. You wouldn't know where it was going to bounce. Maybe that helped us. Maybe it was using a ball that we couldn't figure out where it would bounce next which helped us with our skills and ball control.

We had our own little stretch of street where we always played. Tetlow Street, people called it. Other boys knew where it was and would come there too. You knew everybody and everybody knew you. We would take a stretch of the street, put posts down at each end and, if a car came, someone would call out and we'd have to stop to let it pass. Weekends were the best time, especially Sundays, when everybody goes to church so the roads are really quiet. Sometimes we might have enough players to make three teams so whoever wins stays on for the next one. And it was always good if you had the ball. We all wanted to play so, if you had a ball your parents had given you, no one would say anything bad or stop you playing. If they did, you could pick up your ball and go home!

Sometimes we would go to play on a "field", usually at a school nearby. That's a pitch, but I don't mean a pitch like at a professional club in Europe. Those are beautiful: green and flat. At home, it would be a hard, dry surface. Every time you fell over, you'd get cuts and grazes. But we'd run around, we'd play just because we loved the game. You wouldn't even feel those scratches. We were full of energy and we'd play from morning until night unless our parents shouted at us to come inside. We'd forget everything; forget to eat. Quick: get a little snack and a drink and then play again! I didn't have any kind of coaching until I was about 11. When you are younger, seven or eight, you just play and whatever skill is inside you can grow.

I played at school, too. If you have skills from an early age, people notice, they tell you how good you are. And then, when it comes to games and selecting a team, they pick you first. That gives you confidence and encouragement, for football and for the rest of your life, too. It gives you status.

My dad played football – and tennis as well – and so did my brothers. My dad was chairman of our local club, Spartans, for a while. But back when I was a boy, people didn't think of football as a career. Only one or two players, like Stephen Keshi [former captain of Nigeria, now manager of Mali], had gone to Europe to play.

Sometimes boys would get in trouble for football: parents wanted them to read their books and study. Most Nigerian footballers don't come from families who have a lot of money. The poorer families need their children to help out, to go on the street to sell stuff and do their bit to raise money to help and support the family. So they can't just be playing football all the time.

I go back to Nigeria now and I still see boys playing football in the street just like I used to. What's different now is that people have seen what Nigerian players have achieved and, these days, everybody definitely wants to play football. Kids see what football can do for them: "I want to do what Kanu has done!" Parents think, "Football is something my boy can do, something he can do to earn a living." You'll have trials for a local team and 100 boys will be there. I guess a person like me, now, is a role model. Nigeria is a big country: 145 million people. Imagine what it's like to stand up and everybody knows you. Kids want to speak to you, find out what makes you tick, how it has happened to you. It is important that I give something back. That's why I wanted to work with Unicef, why I set up my heart foundation.

I have also set up a little academy back in my home state, Imo, so boys can have what they need to be able to play. At the end of every season in Europe, I gather up all the kit I can and take it home for the boys. There's a lot of talent in Nigeria. Some of it is hidden away, out in villages nobody knows about. Their families don't have the money to bring them into the city to be spotted. My idea is to give kids the chance to train and play and allow their talent to shine through. I want them to have the chance to show how good they are.

I can still remember the boys I played with when I was little. There was one, a boy named Uchenna: we called him "Lefty". We used to hang out a lot, playing football all the time. When I go home to Owerri, I still see some of those guys. And we still play. Some of them have moved away, some are still there. But you don't forget your roots and we get together, eat, drink, hang out. And, at the weekend, we play football together, for fun. We go and find a school field and have a game. And we remember the old days because loving football starts when you are young. Look at the boys when they play: clothes dirty; then they're washed at night before they put them on next day, and get them dirty all over again. All they're thinking of is to play football. They don't even think about eating. Football is their food. 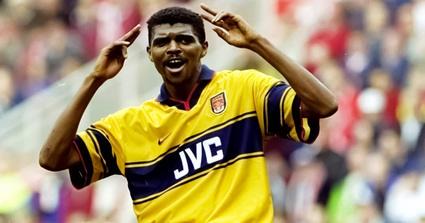