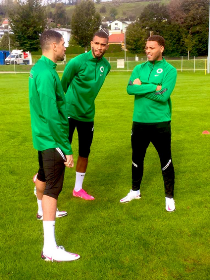 While the likes of Ovie Ejaria and Chuba Akpom are still processing their change of association from England to Nigeria, it is all but confirmed that former Germany U20 skipper Akpoguma will make his senior debut within the next five days after FIFA approved his one-time request to change associations.

The defender's application for a one-time switch to play for the three-time African champions was approved in record time thanks to the persistence of Nigerian Federation boss Amaju Pinnick.

In an interview with ESPN's Colin Udoh, Adelakun stated : "I'm not going to claim credit where it is not due. The President of the Nigeria Football Federation, Amaju Pinnick played a very big part in it.

"I and Gernot Rohr were putting pressure on him saying we need this player (Akpoguma) and he keeps telling us 'don't worry we'll do it because I'll speak to my friends in FIFA', and I remember sounding a note of caution and saying you don't push FIFA, they will take their time but he did, he pushed them and he got it through.

"He can be very persistent sometimes and sometimes it works to good measure and I have to give him all the credit for it.

"We identified a player, we approached the player, Gernot spoke to his family, I spoke to his dad, I spoke to him, he wrote the letter, we prepared the documentation but the one who got it over the line was Pinnick and we have to give that to him."

Born in Neustadt an der Weinstraße, Germany, Akpoguma can now only represent the Super Eagles at international level with his request to change association granted by FIFA.