After Manchester City Won Fulham In EPL Checkout Their Remaining Fixtures - Can They Win In All?

By Challyboy (self meida writer) | 1 months

The Manchester City are indeed topping in the premier league and has embarked on a clean sheet record since this season but the Manchester United stopped their unbeaten record.

The Manchester City are proving to become the best Premier league clubs in England this season. They have been in form this season. They are still partaking in the champions league competition and they have won in their round of sixteen.

The Manchester City Will be facing the Leicester city in premier league. The Leicester city could stop them this time since they are stronger this season they are in the third position. And they will be the hst.

They will have great problem against Chelsea, Leeds United and the Everton.

If only they could win their five matches and a draw, they are the winner in premier league. 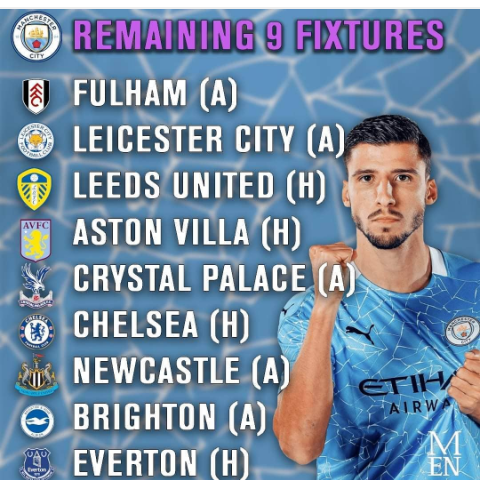 Unable To Think Of Some Latest Styles? Here Are 50 Decent Outfits For Modern And Classy Women

Despite Being Called A "Flop", No Other Chelsea Player Has Done What Werner Has Done This Season

After Arsenal Drew 1-1 With Fulham, This Is How The EPL Table Looks

Opinion: This Is The Worst Offside Decision By The Video Assistant Referee (VAR) This Season