Ole Guna Soljaer made some changes to the side that earned a draw against Crystal Palace on Monday with Fosu Mensah and Mc Tominay replacing Nemajah Matic and Luke Shaw respectively.

The Red Devils needed a win to keep Champions League qualification hopes alive with Chelsea and Leicester City all wining their respective matches. Manchester United responded with an empathic win with goals from Marcos Rashford who scored his first away goal of the season and Anothy Martial impressive run continue with another goal bring United level on point with fellow Champions League hopeful Leicester on 62 points.

There were some controversial decisions by the centre referee with irked the home side and Roy Hodson. 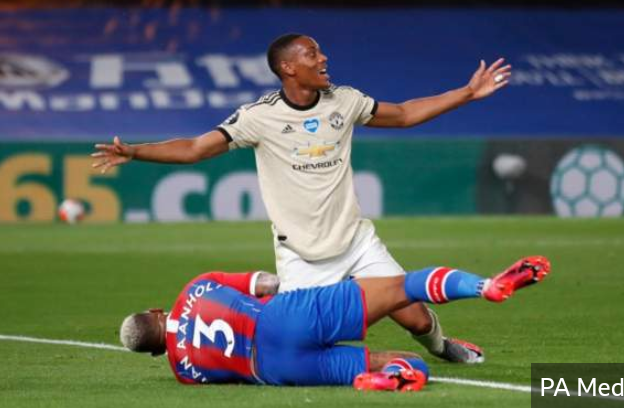 √ Jordan Ayew's Goal Ruled Out For Offside By VAR

The Ghanaian International thought he had pull his team level in the second half only for our old friend VAR to rule out for Offside. A decision which provoked Roy Hodson.

Both have scored a 17 goals apiece for United this season and have assisted each other more than six times to that effect. If United are going make Top Four, then Ole would have to tickle these two to keep up the pace.

Manchester United tackles Chelsea on Sunday in FA Cup Semis at Wembley in a clash of the Titans.