By Omniscient (self media writer) | 9 months ago

Lionel Messi is an Argentinian that plays for Barcelona football club in Spain.

He is also the captain of the football team.

The team was able to win the Copa del Ray title after defeating Athletic Club with a 3-2 win.

Everyone is speculating where Lionel Messi would play next season. He has just two months left in his contract with Barcelona. 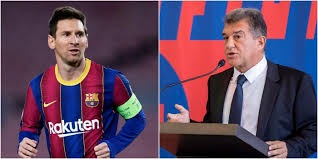 Lionel Messi is regarded as one of the best footballers in the world today. He has won so many titles with Barcelona.

However, their performance in recent years after the MSN era has made the captain to look at other leagues for more competition.

The Barcelona superstar wanted to leave the club last season, but was compelled to stay at the club.

The new President, Joan Laporta is hopeful that he will remain at the club at the end of this season.

However, Lionel Messi has not said anything about his future with Barcelona. Does this mean that the Barcelona superstar might not renew his contract with Barcelona at the end of the season?