Adam Cole's shock attack on Finn Balor and Kyle O'Reilly during last week's NXT was one of the more unsettling moments in recent history.

After Cole brutalized his former Undisputed Era stablemate, NXT has provided a medical update on the former NXT Tag Team Champion. A brief clip mentioned that O'Reilly would be out of action for four to six weeks. 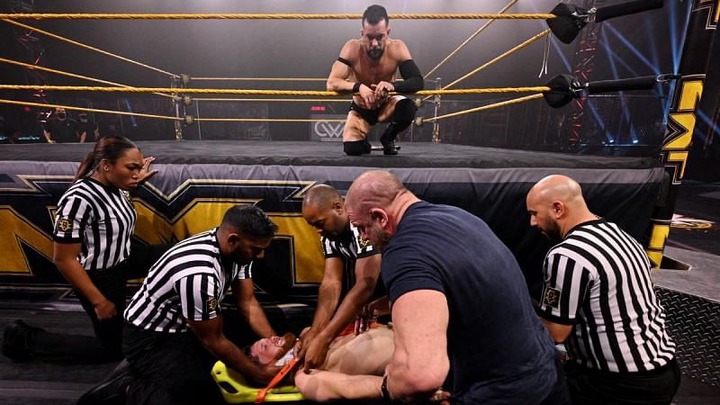 Balor and O'Reilly had garnered mutual respect after competing against each other in two of the best matches in NXT history. Balor retained the NXT Championship in each match, but both men displayed sportsmanship following the bouts.

After the latest match, Pete Dunne, Oney Lorcan, and Danny Burch all attacked the Prince. The Undisputed Era made the save. Balor then defended his belt against Dunne and retained it once again.

Immediately after that win, Dunne and the NXT Tag Team Champs attacked Balor. Cole, O'Reilly, and Roderick Strong made the save, but as the foursome went to pose in the middle of the ring, Cole superkicked the NXT Champ.

The end of an era in NXT O'Reilly went to check on Balor, but Cole proceeded to superkick is stablemate. It left everyone shocked, including Strong. Things took a darker turn last week on NXT as Cole attacked both men once again. He took things further, however, by driving O'Reilly into the steel steps.

The implosion of the Undisputed Era is undoubtedly one of the biggest storylines in NXT history. The group has ruled the black and gold brand for the last few years and had done almost all it could in NXT.

The group has won every title available in NXT and even turned face in 2020. Is that turn ending with members of the group on different sides? Cole seemed to allude so after his actions.

The update on O'Reilly claimed he'd be out of action for four to six weeks. That means that he could be medically cleared for action after WrestleMania 37.

Without an NXT TakeOver event between now and WM, it stands to reason that Cole and O'Reilly could square off at the Show of Shows. There are also two other people to consider in this ongoing angle.

How is Balor going to react after seeing O'Reilly get brutally assaulted by his so-called friend? And what is going on in the mind of Roderick Strong? There are now four to six weeks for this story to unfold completely.

Recent Pictures Of Angelica, 8 Years After Receiving A Kidney From Her Mom