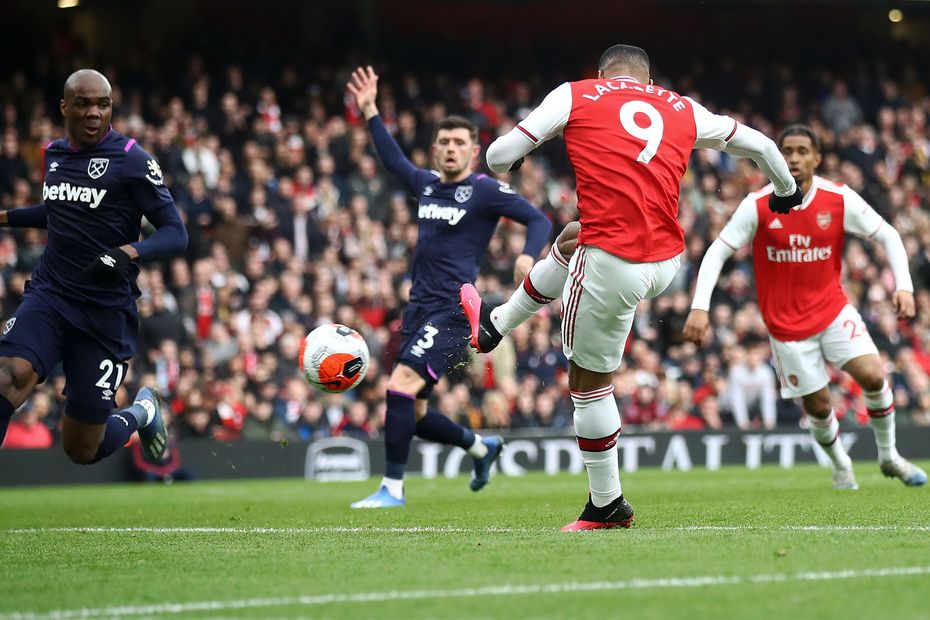 Incident: Pierre-Emerick Aubameyang's shot is deflected up to Mesut Ozil, who heads across for Alexandre Lacazette to score. Sian Massey-Ellis, the assistant, raises her flag for offside so no goal is awarded. As with all goalscoring incidents, the VAR checks the offside call and finds Ozil was just onside so a goal is awarded.

Foy's view: This is where VAR really adds value. It was a tight call.

In Sian's view, in real time, Ozil was just offside so she raised the flag after the ball was in the net. At this point, the on-field decision was no goal, and offside. But after VAR verified that Ozil was onside, the goal was correctly given.

In terms of process, it was really good. I'm sure the officials would have liked to come to the decision quicker, but the most important thing is we got the right outcome.

Incident 1: Moussa Djenepo goes in on Isaac Hayden and plants his studs above the ankle of the Newcastle United player. Referee Graham Scott awards the Southampton winger a yellow card but is advised to review the incident by the VAR. Scott goes to the Referee Review Area and, after rewatching the incident, awards Djenepo a red card.

Foy's view: It's a red card. Djenepo is a little unlucky as Hayden gets to the ball just ahead of him, but it was a heavy touch by the Southampton man, who was always second favourite to get there. He catches Hayden late and, from his position, Scott probably can't tell the intensity.

But it was a good use of the monitor and the correct decision was reached.

Incident 2: After a corner is cleared Sofiane Boufalsticks out his arm to control the ball, which hits the Southampton winger's upper arm. Play is waved on, but at the next restart, the VAR advises Scott to award a penalty to Newcastle.

Foy's view: Boufal clearly leans in with his arm, the referee plays on, but the VAR was able to advise him this was a clear-and-obvious error and a foul had been committed.

The ball does hit the top of his arm, but in line with the current IFAB protocols, this is classed as handball.

Incident: In the build-up to Chris Wood's opening goal, the ball rebounds on to the arm of Dwight McNeil before he crosses. His cross is cleared before Jay Rodriguez's shot is parried and followed up by Wood to score.

Foy's view: This was the correct call. The ball does hit McNeil's arm, but importantly, it wasn't deliberate, so the referee plays on.

Too much happens from when the ball touches his arm to the goal being scored. The law states there has to be an immediate goalscoring opportunity after the ball touches an attacker's hand for the offence to be penalised as a handball. This wasn't the case here.

Incident: Fred goes down in the Manchester Citypenalty area after contact with Nicolas Otamendi. Referee Mike Dean awards a yellow card to the Manchester United midfielder for simulation.

Foy's view: In my view, this wasn't simulation as there was definite contact by Otamendi on Fred.

When the VAR looks at it, he has to determine if the contact was enough to award the penalty. He looked at it and felt there wasn’t.

So the on-field decision stood. It's a subjective call, but for me, it was a penalty.

Incident: Tyrone Mings is penalised for a handball in the penalty area. Referee Michael Oliver awards the penalty, which is confirmed by the VAR.

Foy's view: While this may have looked harsh, it is consistent with the Premier League's approach to handball: the top of the shoulder down to the armpit is considered handball.

What I would say is Oliver was in an excellent position. Mings does push his arm away from his body, which is probably what convinces the referee to award the spot-kick. The VAR checked this, as they do for all penalties, and there was no conclusive evidence to show the ball hadn't hit Mings' arm.