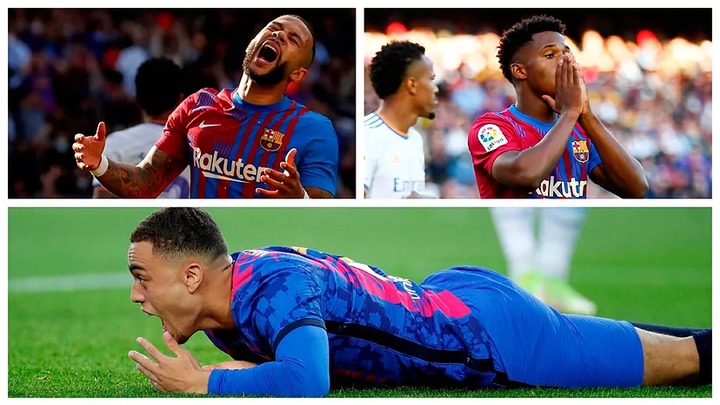 Barcelona's nightmare against the best teams continues after suffering a 2-1 loss to Real Madrid at El Clásico on Sunday. In four tough games this season against Bayern Munich, Benfica, Atlético de Madrid and Real Madrid, Barcelona have only scored one goal, marking Sergio Aguero's return to this classic game.

The lack of threat in the final third was obvious to every spectator of the weekend, with Sergino Dest, Gerard Piqué and Ansu Fati narrowly absent, but the Blaugrana never looked very dangerous in front of goal.

In football you have to control the areas, said Sergio Busquets after the game against Real Madrid. And Barcelona have been struggling to do this against the big teams for a while now.

Ronald Koeman has looked for alternatives on his offense and his injury problems have been undeniable this season as Agüero missed most of the season and Ousmane Dembélé did not play a single minute.

Some absences have forced Koeman to test players like Philippe Coutinho, Gavi and Sergino Dest but a solution has yet to be found.

A 3-5-2 against Bayern and Benfica

The system used in the Champions League against Bayern Munich and Benfica was a way to bolster their defense and midfield in response to the lack of strikers. In both games, Memphis Depay and Luuk de Jong started, Yusuf Demir and Coutinho came in the second half against Bayern Munich.

In the game against Benfica, Ansu Fati and Coutinho played against each other to reinforce the attack. However, he failed in both games, and Koeman's team failed to score a shot on goal in the full 180 minutes.

After losing the Champions League, Koeman decided to change the system against Atlético de Madrid and instead use a 4-2-3-1 with only one Memphis at the top. Behind the Dutch were Frenkie de Jong, Coutinho and Gavi.

Ansu Fati came in later and the formation changed to a 4-3-3 with Gavi taking a spot on the right. Once again the team failed and the teams kept fighting against the best.

El Clásico saw a new system implemented in the classic 4-3-3 that was originally revolutionized by Pep Guardiolas Barcelona about 10 years ago.

However, one difference between Koeman's 4-3-3 against Real Madrid and his 4-3-3 against Atlético was the introduction of Dest on the right wing, while Memphis and Fati occupied the other two attacking positions.

Dest had a great opportunity to put his team ahead in the first half after a strong run in Memphis, but the American international threw the ball over the crossbar leaving the Barcelona players head in hand.

In this duel, Agüero and Luuk de Jong would go out to the field, although the Argentine has only made his second appearance with the team so far. Fortunately for Koeman, Agüero made it to the goalscorer list and it is a glimmer of hope that Barcelona are still at risk. However, you still have a lot to do.