By Challyboy (self meida writer) | 16 days

The table, shows the possible outcome for all the premier league matches in week 34. The premier league remains few weeks and from the look of things, the first position has been declared likewise the second position.

This weekend premier league looks quite interesting as lots of clubs are expected to lose in points while some might gain points.

The Manchester City Will donate over Crystal palace on their away match. Chelsea to thrash the Fulham at the Stamford Bridge. Everton to beat Aston Villa a the Everton stadium. 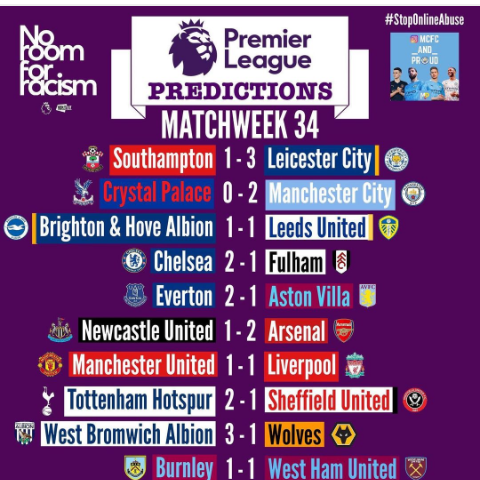 Do you think this possible outcome could become possible t the end on the nintey minutes of each game this weekend?

Kidnapped Deeper Life Pastor Has Been Released In Ondo

Apostle Johnson Suleman Drops Fresh Prophecies For this Week, Says, 'It's Your Week of Laughter'

The EPL Table After Yesterday's Games As Liverpool Reduces Chelsea's Lead Over Them On The Log.

Fashionistas, Check Out These Latest Plain and Patterned Ankara Styles for you