The buildup to the summer transfer window has now begun, speculation continuing to swirl as Chelsea eye possible reinforcements.

The Blues failed to sign in a single player during the January window, despite seeing their transfer ban cut short by FIFA.

Here, Sports Mole rounds up the latest news on possible signings and goings from Stamford Bridge. 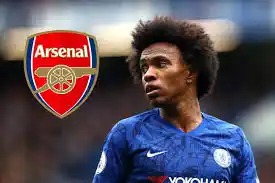 Arsenal are reportedly still in contact with Chelsea playmaker, Willian over a possible move to Arsenal ahead of the 2020-21 campaign.

The Brazilian has a contract with the Blues until the end of the 2019-20 season but his long-term future at Stamford Bridge remains uncertain.

Tottenham Hotspur are reportedly offered the 31-year-old a lucrative contract to make the move to North London on a free transfer this summer.

However, according to Bleacher Report, Arsenal are also very much interested in the hunt for the South American, with the Gunners 'making contact' to determine what kind of deal he is looking for in terms of wages and length.

Willian, who is believed to want a three-year contract at Chelsea, has scored 11 times and provided nine assists in 45 appearances for Frank Lampard's side during this current season.

Arsenal boss Mikel Arteta will reportedly only have limited funds to spend this summer due to the financial impact of the recent outbreak, and the Spaniard recently admitted that he had "big concerns" over the size of the club's budget.

Chelsea are reportedly contemplating on signing a new central defender to the club during this summer's transfer window.

The Blues are currently on the third position in Premier League table, while they will have the chance to secure a spot in the FA Cup final when they face Manchester United in the semi-finals on Sunday.

Frank Lampard's side have had their problems in the defense this season, conceding 49 times in the Premier League, which is only the 11th-best defensive record in the division.

According to Goal, Chelsea 'are increasingly evaluating' bringing a new centre-back to Stamford Bridge to improve their squad ahead of the 2020-21 campaign.

The report, meanwhile, claims that neither Antonio Rudiger and Andreas Christensen have been proposed new deals by the club, which has placed their futures in doubt.

The London club have already registered deals for Hakim Ziyech and Timo Werner ahead of next season, while they also continue to be linked with Leicester City's Ben Chilwell.

Brendan Rodgers: 'Ben Chilwell is not for sale'

Chelsea could rival Manchester City to signing Ajax defender Nicolas Tagliafico, according to a report.

Antonio Conte is reportedly trying to encourage the Inter Milan board to provide the funds required to sign Chelsea midfielder N'Golo Kante.