Chelsea's Players Score Sheet After The Win Over Manchester United Chelsea came out victories in the FA CUP semi-final match by 3 goals to 1 against the Manchester United giant after the fourth trial of playing them this season.

Chelsea set up a 3-4-3 formation with

Caballero in goal, Azpilicueta (c), Zouma, Rudiger as the central defensive pairing, James and Alonso as the wide men, Jorginho, Kovacic as the central holding midfielder with Jorginho playing more deeper, Willian and Mount to run around the defensive line, and Giroud as the target man up front

Willy Caballero: He wasn't really called into actions except for the only saves he made on Bruno Fernande's free kick and other smart runs he made outside to get the balls from reaching the target man. 7/10

Ceasar Azpilicueta: The ever gallant and never tireless Chelsea captain only has little mopping up to do at the central back as we saw a lot of upfront runs from him which eventually produces the assist to Oliver GIROUD goals. He was instrumental in controlling the team play for the whole 90minutes. He earns a 8.5/10 rating

Kurt Zouma: The black Chelsea player is always ready to commit himself into every actions he was called upon almost gifting Manchester United a free-kick when Martial feet collided with his own feet and still start Eric Bailey injury with the head colliding after his headed ball over the bar. 8.5/10

Rudiger: He had a assist to his name on a night when he was on fine form. He was not really called into actions at the back as Jorginho and Kovacic were always available to clean the defensive sheet. 8.5/10.

Reece James: The youngster who many predicted that would benched the Chelsea captain is finally making his pacy presence felt on the pitch with his exceptional runs and dangerous crosses he sends inside the box 18. He is smart and intelligent. 8.5/10

Marco Alonso: He is known for his slow pace recovery and the unnecessary fouls he is commuting, I would be selfish if I forget to honour him with those dangerous crosses he sends to the box 18. He was exceptional today with his cross which led to Chelsea's third goal. 8/10

Jorginho: The kante replacement was exceptional today in cutting out the line play between Fernandes and the attackers. 9/10

Kovacic: The major reason Manchester United was confused on the ball was because this man took charge of the midfielder by committing himself into the balls 9/10.

Willian: He was found most of the match playing and attacking centrally. Recently, i never caught Willians smiling on the field always flawing. He is sometimes clueless on the use of the attacking ball while we all hopes he should improve better but can't blame less as a one time a star will always be a star man 7/10

Mason Mount: He is very young and intelligent called once again from his seating bench to prove himself of earning a starting line ups and he proved himself to be that Mr reliable as his shot on target at least secured the point before it was finally secured by the Maguire's goal. He also plays centrally beside Willians and behind the striker 8/10

Oliver Giroud: Call on the 33years old striker and he is ready to deliver. Didn't had much to do upfront as he had to wait for the ball 8/10 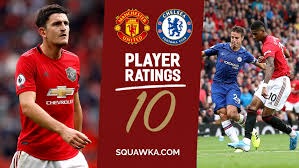 Loftus-Cheek: Introduced into play to continue the tricky moves of his replacement Kovacic but didn't had much to do 5/10

Hudson-Odoi: A flop to watch as he caused the penalty by silly fouling Anthony Martial. Did nothing worthy upfront 4/10

Tammy Abraham: Everyone would taught the No. 9 Chelsea dilemma and his previous hair cut is now affecting this young striker. He is still improving though 5/10