Stephen Adam Amell (born May 8, 1981) is a Canadian actor and producer best known for playing Oliver Queen / Green Arrow on The CW superhero series Arrow, the show that started the Arrowverse. In January 2012, Amell was cast as Oliver Queen, the Green Arrow in The CW series Arrow, based on the DC Comics superhero of the same name. This series and role led to Amell appearing as the character on other superhero series on the network as part of the growing Arrowverse on shows such as The Flash, Legends of Tomorrow and Supergirl, as well as the CW Seed Webseries Vixen. 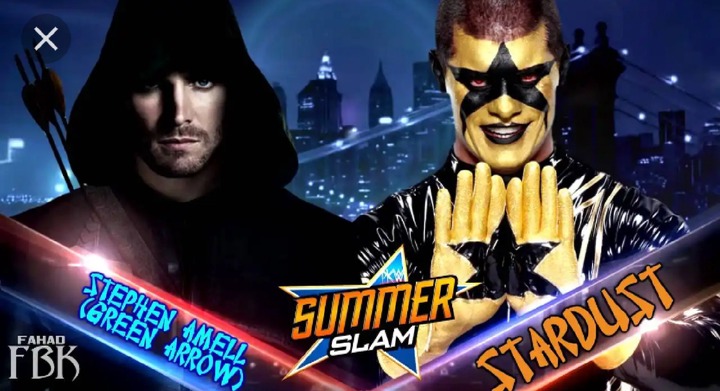 Amell also famously co-starred in the film Teenage Mutant Ninja Turtles: Out of the Shadows , released on June 3, 2016, as vigilante Casey Jones. Amell’s fandom made its way to WWE proper in 2015. On the May 25, 2015 episode of Monday Night RAW, Cody Rhodes — at the time performing under the persona of “Stardust,” a flamboyant David Bowie-esque figure — provoked Amell, who sat ringside, and challenged the actor to a match. Amell returned on August 10, where another provocation by Stardust forced Amell to intervene during a match between Wade “King” Barrett and Adrian Neville. Afterward, an angry Triple H booked Amell in a tag-team match against Cody Rhodes for SummerSlam 2015 in Brooklyn, with Neville as Amell’s partner. In the match Amell took to the Sky and took out his opposition in a rarely seen move. Amell and Neville emerged victorious. Wrestling gossip sites later reported that fans were happy with his participation and willingness to work the match. Amell and Rhodes became friends after working SummerSlam, which led to Rhodes’ recurring role as the villain Derek Sampson on Arrow. Rhodes would remain Amell’s wrestling hook up, even after he left WWE in 2016.