By Impurity (self media writer) | 2 years ago 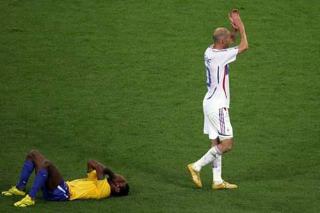 The greatest act of Zidane's last dance came against the defending champions, Brazil. A Brazil team, who some people though were even better than the winners of 2002. Boasting new regulars like Kaka and Ronaldinho, along with the old guard of Ronaldo Nazario. They were considered as the outright favourites but that was until a bald genius, who had already announced his retirement after the tournament, came into the mix.

The stats do not do justice to this performance, as Zidane had completed 11 successful dribbles and created 5 clear chances. All this does not reflect what he did on the pitch. Every 50-50 seemed to be in his favour as he dazzled not just the Brazilian midfield but all of the defence as well. It almost seemed like there was no Brazilian player on the field, who Zidane didn't steer past. He also went on to assist the only goal of the game. A beautiful cross into the box which Henry simply touched into the back of the net. 360 turns, step overs, incisive passes, aesthetic flicks, this performance had everything what one expects from a midfielder. All that being done when Zidane made nearly all of the players on the pitch his puppet and every touch or pass he made, decided the flow of the game.

Zidane was already considered to be one of the best midfielders ever, but this game took to a whole new level. His World Cup run ended unceremoniously, as France lost the final after his infamous headbutt. Nonetheless, nothing can take away what Zidane had done back in 2006 and that performance has become a legend in itself.

Now that the series has come to an end, I would like to state some of the honourable mentions which I feel just missed out on the list.

With this the series has officially ended.