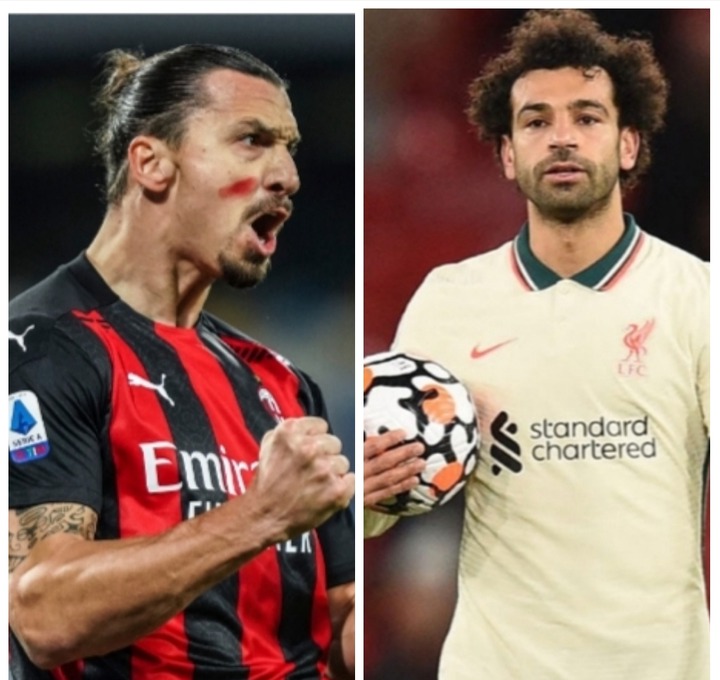 *Ibrahimovic and Salah were on target for Milan and Liverpool respectively.

Below are how the various clubs added beauty to the round leather game across the various leagues.

Chelsea triggered a goal rush in the Premier League on Saturday by putting new boys Norwich City to the sword 7-0 at Stamford Bridge.

Manson Mount opened the scoring in the 8th minute and completed his hat-trick on 90 minutes, while Hudson-Odoi, Reece James, Maximillian Aaron, and Ben Chilwell were also among the goals for Thomas Tuchel's vastly improved side.

Liverpool won the battle of the Reds on Sunday at Old Trafford in the game of the week 9 encounter.

The visitors started the match with their tails up, racing into a 4-0 first-half lead and scoring once in the second half, to condemn Ole Gunnar Solksjaer's team to their worst defeat in several years.

Mohammed Salah weighed in with a hat-trick whole Neiby Keita and Diogo Jota scored one apiece earlier in the match.

After an erratic start to the campaign following their promotion from the Skybet Championship, Watford finally made a bold statement, trouncing Everton 5-2 at Goodison Park on Saturday.

The home team went in front twice in the early stages, with Davies opening the scoring in the third minute and Richardson putting them 2-1 up on 63 minutes after King, who scored a hat-trick, pulled Watford level on 13 minutes. Watford's other scorers on the day were Kucka and Nigeria striker Emmanuel Dennis, who were the other Watford scorers on the day.

The tie involving Brighton and Manchester City at The American Express Community Stadium in Falmer, East Sussex, produced five goals, with the latter bagging four of them.

The Citizens were always going to overpower their modest hosts, and this they accomplished in style, with Phil Foden netting a brace while Iker Gundogon and Riyad Mahrez also hit the target. Brighton's consolatory goal came off the boots of  Mac Allister on 81 from the spot

This is one of three fixtures that witnessed a goal feat in the German top flight.

The home team emerged tops in the battle of lightweights, putting four goals past their visitors during the game week 9 fixture at MEWA ARENA on Friday.

Onisiwo, Bell and Burkardt scored to put them 3-0 up within the first 26 minutes. Burkardt completed his brace on 71 minutes, to put the game at 4-1 in favour of Mainz.

The defending champions were devastating at the Allianz Arena, where they thumped visiting Hoffenheim 4-0, scoring twice in both halves.

Gnabry and Robert Lewandowski fired them 2-0 up half an hour from the start, while Choupo-Moting and Coman accounted for the two other goals.

Leipzig have been one of the dominant forces in the German elite division in the last decade, and this they underscored during Saturday's 4-1 mauling of new boys Greuther Fürth at Red Bull Arena.

The visitors put up a stern resistance up till the 45th minute, when Hrgota opened the scoring from the spot. Forsberg, Szoboszlai, and Hugo Novoa scored one apiece as the frenetic side secured maximum points.

Newcomers The US Salernitana were handed one of many reality checks by visiting Empoli, who romped to a 4-2 win in the game week 9 tie at Arechi Stadium, Salerno.

The visitors raced into a 4-0 lead before Ranieri pulled one back for the home team in the 48th minute, while a 55th minute own-goal by Ismajli made it 4-2.

Goals are far between in the Italian top flight, but the tie involving Bologna and AC Milan at Stadio Renato Dall'Ara produced six goals, with four of them bagged by the visitors.

The ageless Swedish striker, Zlatan Ibrahimovic, scored for both sides, pulling a goal back for the home team on 49 minutes after Rafael Leo and Calabria had put Milan 2-0 up and rounding off the scoring on 90 minutes for the Rossoneri.

of the tie at Stadio Marc'Antonio Bentegodi in Verona proved bookmakers wrong, with the home team inflicting a 4-1 defeat on their illustrious visitors, whose face-saving goal came off the boots of Ciro Immobile on 45 minutes. Simeone scored all four goals for Verona.

Regarded as the most technical of the five major European leagues, the Spanish top flight rarely records a flurry of goals, but the tie between Real Betis and Rayo Vallecano proved an exception to that rule as it produced five goals.

The home team got the upper hand, edging the visitors 3-2 in the game week 10 fixture at Estadio Benito Villamarín Sevilla.

Torres fired the home team in front in the 8th minute. Rafa Mir made it 2-0 in 24 minutes before Morales pulled one back for the visitors in 33 minutes.

Diego Carlos and Munir scored to put Sevilla 4-1 up. Before Fernando bedded the match at 5-3, Morales and Melero found targets for the visitors.

Ajax underscored their bragging rights over rivals PSV Eindhoven, with the Amsterdam giants cruising to a 5-0 victory in the game's week 10 encounter at the Johan Cruijff Arena in Amsterdam on Sunday.

Berghuis, Haller, Antony, Klaassen, and Tadi were the scorers.

This fixture was one of two that lived up to the billing in the French top flight.

The game week 11 encounter at Stade Bollaert-Delelis in Lens recorded five goals, with four going the way of the home team.

Wesley Said got a brace, Ignatius Ganago and Przemysław Frankowski scored the two other goals for Lens while Nicolas de Préville scored the visitors' only goal on 33 minutes.

The second game on a day when leaders PSG battled Marseille to a scoreless draw in a late kick-off at the Orange Vélodrome in Marseille.

Again, the home side got the better of their visitors 3-2 at Allianz Riviera in Nice, with the away team racing into a 2-0 lead via Karl Toko Ekambi and Houssem Aouar before Youcef Atal reduced the rally on 80 minutes. An 89th minute penalty goal by Andy Delort levelled matters at 2-2, while Evann Guessand scored the decisive goal two minutes into added time.