By SportyGist (self media writer) | 27 days ago

Yesterday night saw another lacklustre performance from FC Barcelona. They were up against a lowly Cadiz football team but couldn't do much damage. The match ended in a 0-0 goalless draw with neither side registering a goal.

The match performance from Barca didn't go down well with its players. Ronald Koeman said during the match interview that "Finishing in a high position in La Liga with this squad would be a success". This statement from the coach implied that he has no belief in his players being competitive enough for top spots or big tournaments.

What Koeman fails to realise is that comments like this tend to alienate him from his players and also further sours his relationship with the fans and the club's management. If a coach continues heaping blame on his players despite his shortcomings without taking responsibility for poor performances; this makes his players lose respect for him. And if Koeman isn't careful, this might come back to bite him in the future.

Koeman seems to have lost faith in winning anything tangible with the team with his numerous comments implying it's a miracle the team isn't far worse as it is presently. The other day, Koeman said that "Thanks to me this club has a future". With all due respect, Koeman has done nothing to improve the team and gives him no warrant to make such a claim.

This scenario is evident in the remarks of two first-team players: Gerrard Pique and Sergio Roberto. Both players refused to side with Koeman and believes they are competent and would not settle for little.

Roberto wastes no time in taking a jibe at his coach saying:

“Here you have to win the league”, Sergi Roberto says, disagreeing with his coach. 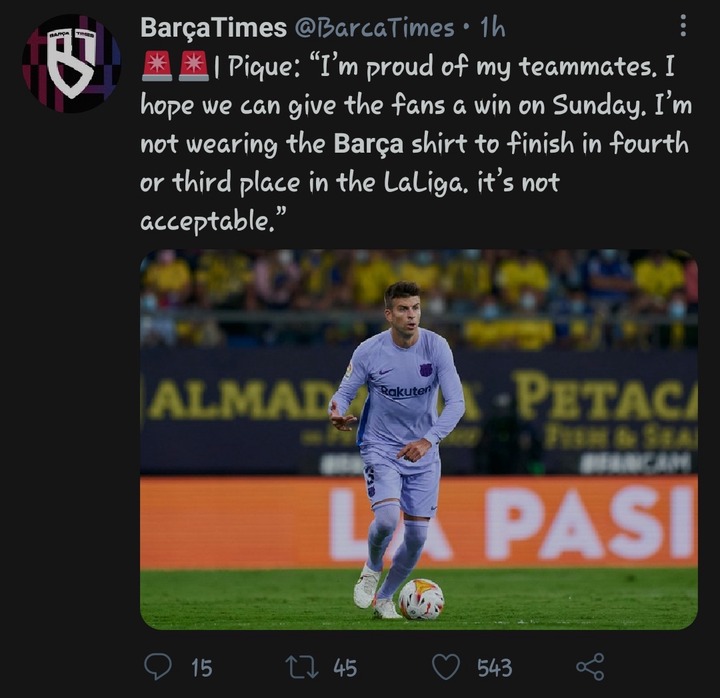 This shows that the team is critical of Koeman and does not necessarily believe in his ideals or statements.

It's a matter of time to see if Koeman survives this season at Barcelona without getting his contract terminated. The coach is under pressure to perform for La Blaugrana.

3 Things Manchester United should do, if they want to beat Liverpool.

3-4-2-1 Chelsea’s predicted line up vs Norwich City: Werner and Lukaku set to miss out.