By Footballfocus (self media writer) | 1 year ago

Manchester United hopes of winning FA Cup continue today as they take on Chelsea in a semi final clash at Wembley Stadium.

The two side have meet three times this season with Manchester United all taking the win in their meetings. They played home and away in premier league this season and a match in Carabao cup.

The results now mean that Lampard has not gotten any point or win from Manchester United.

Man United were so lucky of very fortunate to be playing in FA Cup semi finals as 118th minutes goal against Norwich from Maguire in the extra time secure their progress into the semis. 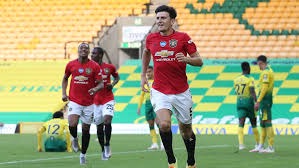 United were leading 1-0 when Odion Ighalo broke the deadline in the 51st minute of the match tonight set record of scoring in his first four start for Manchester United.

Only for them to be level on point in 75th with Norwich when Cantwell place a shot pass Degea but thanks to Maguire's goal.

Lampard men will be looking to beat Man United this evening just like how Arsenal shock Man City yesterday.

Chelsea had a hard fought win against Leicester at king power stadium as they manage to win 1-0 which was gotten by Barley in the 63rd minutes was enough to secure their progression into semi final this evening.

Now that the defending champions Man City were being knocked out by Arsenal yesterday definitely a new champion will emerge this season.

So we will actually be expecting the match to be hot this evening.

Let take a look at the starting xi that will determine the contest of this evening clash.

A surprising lineup from Solskjear as he drop both Martial and Ighalo on the bench.

Let see who progress to meet Arsenal in the final.