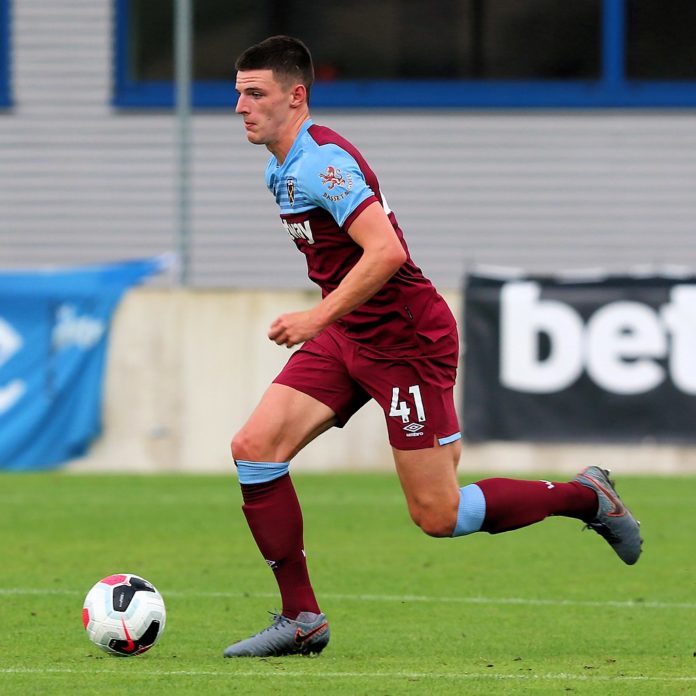 Chelsea have a long-standing interest in West Ham United midfielder Declan Rice and it looks like Frank Lampard can finally get his man.

Declan Rice was a Chelsea youth player before he went on to join West Ham United in 2013 and the Blues are now desperate to bring him back to Stamford Bridge after his meteoric rise at the London Stadium.

And as per a report in Football Insider, Chelsea are offering as many as three players in order to sway David Moyes’ mind and persuade him to part ways with the 21-year-old.

The report claims: “Chelsea will be offering to West Ham three of their senior stars in potential exchange bids for Declan Rice, Football Insider can reveal. The west Londoners have made the 21-year-old one of their top targets and are plotting various offers in what is set to be a complex and expensive summer pursuit.

“A Blues source has told Football Insider the club will offer West Ham one or more of Fikayo Tomori, Kurt Zouma and Michy Batshuayi in exchange for Rice.

Chelsea are willing to be flexible on any of the trio, although Tomori will only be available for a season-long loan. Zouma and Batshuayi, who have both been targeted by West Ham in the past, could be offloaded on loan or permanently.”

Declan Rice is under contract at West Ham United until the summer of 2024 so they are in no hurry to sell him but Moyes needs money to rebuild his squad next season. And right now Rice is the most valuable player in the Hammers squad.

West Ham will want to squeeze out as much money as possible if they do decide to part ways with Rice but if Chelsea are indeed ready to send three players across London then Moyes could very well agree to this arrangement.

Also, if West Ham United fail to remain in the Premier League next season then there’s no way they will be able to hold onto Declan Rice beyond the summer.