For the last few weeks on WWE Monday Night RAW, RETRIBUTION has been firmly determined to get Ricochet to join them. Yet the former United States Champion has refused to join Mustafa Ali's faction. This past week on RAW, Ricochet went one-on-one with RETRIBUTION's Mace and lost. Following the match, he was attacked by the faction once again.

As per a report from PWInsider, the plans are for RETRIBUTION to continue this storyline for the next few weeks and try to get Ricochet to join them. But there is no confirmation on what the pay-off for the angle will be. 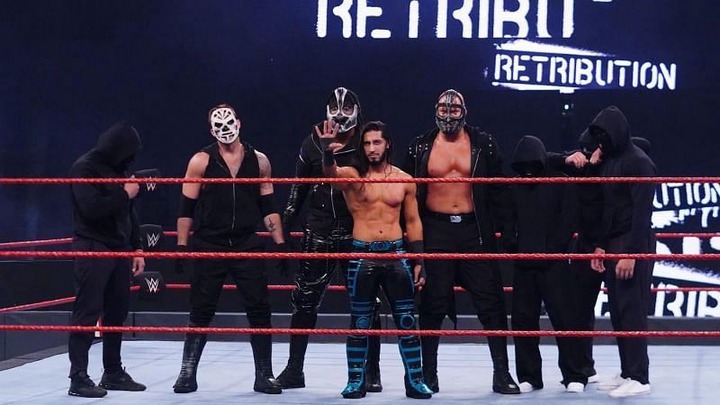 Retribution pushing Ricochet to join their group is something that will continue to play out in the weeks ahead.

Earlier this year, fans saw Cedric Alexander give in and join The Hurt Business, and that angle has been going on quite well on Monday Night RAW. Could Ricochet follow a similar approach by becoming a member of RETRIBUTION soon?

"This doesn't end until I say it ends! And it ends when you JOIN #Retribution!" - @AliWWE #WWERawpic.twitter.com/DRVzFTmvZ1

RETRIBUTION has been wreaking havoc in WWE since August

RETRIBUTION has been a fairly regular presence on WWE programming for a few months now. Earlier this year, a group of masked Superstars invaded Monday Night RAW and set fire to a generator outside the arena. Later that week on SmackDown, the mysterious faction invaded SmackDown, where they attacked the announcers and destroyed the ring with a chainsaw.

After multiple such invasions, the group revealed themselves as RETRIBUTION. They explained their displeasure with how WWE treated them throughout their careers. They turned out to be former NXT Superstars Dominik Dijakovic, Dio Maddin, Shane Thorne, Mia Yim, and Mercedes Martinez. They took on the new names of T-BAR, MACE, SLAPJACK, RECKONING, and RETALIATION, respectively.

In October, the group revealed RAW Superstar Mustafa Ali as their leader, and they started a feud with The Hurt Business. RETRIBUTION's first victory in WWE came when they defeated RAW's Survivor Series team (Braun Strowman, Keith Lee, Sheamus, and Riddle) before the pay-per-view on an episode of WWE RAW in November.