United, City, Chelsea, Leicester All Face A Tough Test In Their Next PL Games As The Battle Continues

Manchester looks set to win the Premier League title after another impressive win against West Ham in their last game. Guardiola's men have won 20 games in a row across all competitions and you can't just predict when they would lose. With 12 points ahead of United on the table, you have to accept that the team has great advantage this year.

Manchester United failed to close the gap once again after a disappointing draw against Chelsea. Ole Solksjaer's men showed they can't challenge for the title this season as they settled for a draw from the start of the game. United has now failed to win any of their last seven games against a top six club.

Earlier before United's game against Chelsea, Leicester failed to move ahead of United after their defeat to Arsenal. It's actually not just about the defeat, Leicester have lost two of their key players to injuries and faces a tough test in their next PL game.

It's all going to be a tough week ahead for all the top clubs in the Premier League. Chelsea will take on Liverpool who are currently below them on the table. Liverpool's win against Sheffield took them 43 points and that's just one point behind Chelsea. Check out the next round of games for United, Chelsea, Leicester, and Manchester City below: 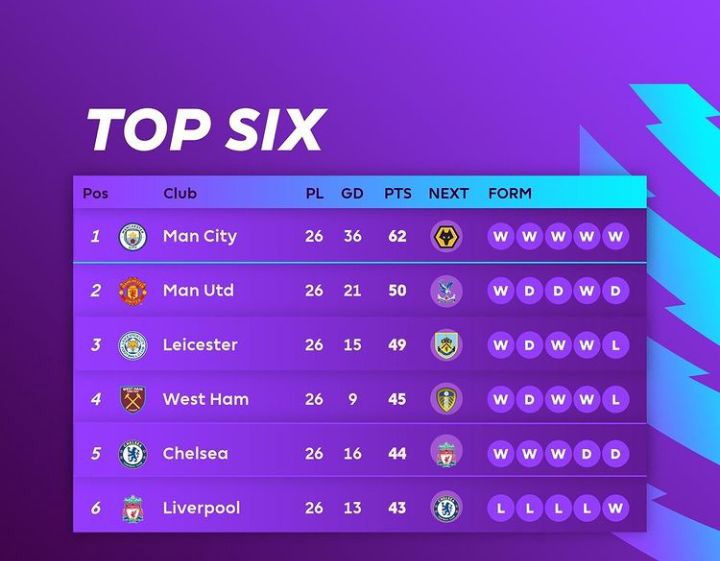 Meet The most respected Man United player in the dressing room, not Maguire

West Ham vs Chelsea... Previewing The race for Top Four

Tiwa Savage Vs Simi: Twitter Users Vote For Who Has The Most Hit Songs