Marco Materazzi has finally revealed what he said to Zidane and it has grab the world attention.

By Sportsalltheway (self media writer) | 11 months ago 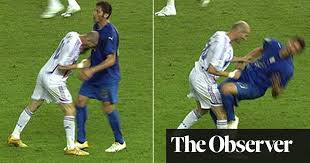 Italian world cup winner Marco Materazzi has finally spoken out the whole story of what happened concerning the powerful head-butt he received from Zinedine Zidane during 2006 world cup final, nearly fifteen (15) good years ago it happened.

Over the years people have been drowned with so many rumors about what caused the toxic head-butt, Zidane also known as Zizou gave to Materazzi during 2006 world cup final.

He, Materazzi told the Spanish outlet AS in an interview, I was very lucky that the drama took me unexpected because if I had known that something like that would have happened to me, I would be glad and prepared because am sure both of us would have eventually be sent off.

After he had scored the France goal in the first half, our coach (Marcello Lippi) told me to always mark him around, not long enough there was contact between us at first in field, then, at the third contact between us, “I frowned and he retorted, I’ll give you my shirt later and I told him that, I would rather take his sister that his shirt”. 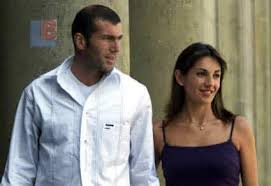 This was first time the former Inter Milan legendary defender has confirmed the truth of what he said to Zizou. Rumors were spreading about more than the speed of light but Materazzi put a stop to those rumors last 2 years by confirming what he said was not about Zizou’s mother but about his sister.

Sincerely speaking, my mother died while I was a teenager and I felt the pain of losing someone close to you and I would never insult Zizou’s mother. Though, “my words were annoying but I don’t deserve such reaction from him, I only told him, I would rather have his sister than his shirt”. 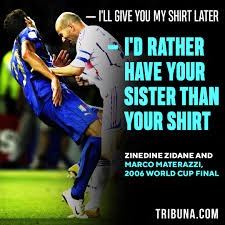 Content created and supplied by: Sportsalltheway (via Opera News )