Who are the most famous football referees in 2021?

Referees are often seen as the alpha and omega in the middle of the pitch when they’re on duty managing the proceedings of professional sporting events which oftentimes comes with a huge pressure of delivering a top-notch officiating without any form of mistakes.

The game of football has over the years seen great judges of the game like Pierluigi Collina, Markus Merk, Pedro Proenca , and Howard Webb who makes sure the rules are strictly adhered to during a game.

With all of the great referees mentioned above that are retired now, the question is who are the top referees of the game in 2021?

Here Are 10 Of The Most Famous 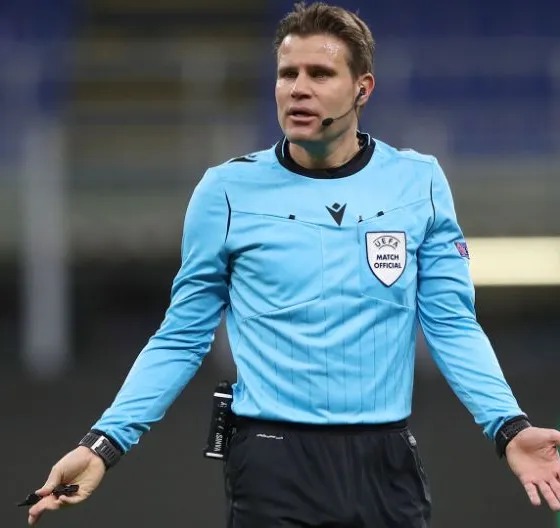 The Wirral-born and Tranmere Rovers fan is no doubt one of the famous referees in world football due to his renowned facial expressions, funny antics, and no-nonsense approach when interacting with players who in one way or the other falls into his black book.

He becomes very famous for his act of dishing out yellow cards and as a matter of fact, he was the first English referee to make 100 sending off in the English Premier League.

One of the controversial moments of Dean was when he handed a red card to Jan Bednarek and Tomas Soucek which got him a death threat before the cards were rescinded by the league association.

Dean has managed over 500 games in the topflight and he was presented with a special commemorative medal before the kick-off between Arsenal and Sheffield United last season, which marked the 500th game he officiated in the English Premier League.

Paris-born Turpin became a FIFA referee in 2010 and he has since gone on to achieved success for himself in the game. He also served as the number one official in the 2014 and 2018 World Cup qualifiers and he finally made his debut in UEFA club competitions in the 2010-11 season UEFA Europa League.

Amongst Turpin’s achievements as a top professional referee is winning the best French referee in 2016, having been voted by the French Football Federation.

In the same year, he officiated at the UEFA Euro 2016 in his home country before he was also nominated by UEFA to be amongst the five officials that would referee at the Men’s Olympic Games football tournament in Brazil.

Turpin also made name for himself in 2020, when he officiated the oldest derby in Bulgaria between Levski Sofia and Slavia Sofia despite not been from that country. His impeccable officiating in the 2021 UEFA Europa League between Manchester United and Villarreal stands him out amongst his colleagues for his calmness.

Makkelie made himself more popular as the official who made the biggest error of the season at the European Championship semi-final match between England and Denmark when he awarded the Three Lions a controversial penalty.

Another controversial incident that involves Makkelie was the 2022 World Cup qualifier between Portugal and Serbia in March where he failed to award the goal Ronaldo scored having crossed the line.

After the match, the Dutch referee later apologized to the manager of the team Fernando Santos saying “The only thing I can say is sorry to Portuguese coach Fernando Santos “.

The Dutchman isn’t just a referee, he’s also a police inspector in Rotterdam and a referee coach for the Royal Dutch Football Association (RDFA) which makes him a popular figure back in his country and all over the globe.

Slovenia-born has been with FIFA since 2003. He was able to get in at a pretty early age, which has allowed him to build his way up to take on some pretty major matches.

He was the fourth official in the 2013 UEFA Champions League Final. Among the other notable games, he has used, including the 2012 UEFA Super Cup and 2017 UEFA Europa League Final, between Ajax and Manchester United.

Whether it is a Champions League Finals or Europa League Finals, it is not uncommon to see him on the pitch when the matches matter the most. He is one of the calmest and collected referees in the game right now, and he is known for never showing any favoritism whatsoever.

The Argentine referee is seen as one of the famous officials of the game for a lot of reasons. Before he made his debut as a referee in the Argentine top-flight in 2007, Pitana has featured in an Argentina movie in 1997 title “La Feria” acting the role of a prison guard as well as working as a lifeguard and security guard at a disco club in Argentina.

Pitana also had few moments playing basketball and football at the regional level before he decided to venture into refereeing in 2006 and even went on to studied physical education which aided him in having deep knowledge about the game.

The former actor and basketball player would always be remembered for the record he set as the second Argentine referee to officiate a final of competition as prestigious as the World Cup, and most importantly how he managed the 2018 World Cup final without errors.

Life itself is about negativity and positivity, as such over the years we have seen great referees officiate games that make them popular due to how they managed the game without errors and complaints from the fans while it can’t be said about some referees.

For some reason, the Turkish referee falls in that category that makes him popular negatively due to how he manages his game which often comes with complaints from the fans.

If football fans in any way don’t remember anything about the Turkish referee, honestly speaking United fans won’t forget in a hurry how his decision swung the Champions League match between the Red Devils and Los Blancos in favor of the Spanish side in 2012 that got him more popular for a wrong reason.

Cakir popularity continues this season following the complaints of Milan fans in the Champions League against Atletico Madrid having been aggrieved with his officiating on the night.

In 2011 in the Europa League match between City and Dynamo Kyiv, Cakir’s ruthlessness in officiating also came to the fore when he sent off Mario Balotelli as the Citizens crashed out of the competition.

The retired Spaniard referee who called it quit after the European Championship is well renowned for his unbiased, discipline, and error-free approach to officiating an elite game.

The Valencia-born started his refereeing career in LaLiga back in 2008, and he has since grown to become one of the famous officials in football with years of experience under his belt as a professional referee.

Lahoz was the man in the middle of the pitch dictating proceedings in the 2021 Champions League final between City and Chelsea.

Those who are not familiar with the Dutch referee could cast their minds back at the European Championship final between England and Italy, he was the official in the middle of the pitch who makes sure the game went smoothly without any complaints of errors from the fans of both teams have handled the game with his cool and calm style of officiating.

Kuipers a player turned referee has a record of being a pain in the neck of officials at the age of 16 when he was playing football before becoming a professional FIFA referee in 2006, having dropped football due to his behavior on the pitch which the officials can no longer tolerate.

Since becoming a referee following his father’s advice he has managed elite matches in the Champions League, European Championship, and Europa League. The finals of 2014 and 2020 clearly come to mind amongst many other finals he’s been privileged to officiate.

His success as a referee on the pitch and owning three of the biggest supermarkets in the Netherlands with over 260 staff makes him one of the most famous referees around.

The 45-year-old Munich-born referee is a doctor of law and he started refereeing in the Bundesliga in 2004, and he has since then gone on to become one of the best hands in handling top matches without the fear of errors that could mar the game.

Brych won the best referee award in 2017 given to him by the International Federation of Football History & Statistics (IFFTHS), and since then he has consistently been nominated as one of the best referees in football for the past six years for his brilliancy in handling games.

Since starting his career in the Bundesliga in 2004, he’s been in charge of more than 500 elite matches including over 115 international games and he’s very respected by the players for his calmness and how he carries out his authority on the pitch.

In an era where officiating has become easier compared to a decade ago where referees don’t have the benefit of consulting the Video Assistant Referee (VAR) to cross-examine their errors when they make mistakes.

Even with the technology aspect of the game that also comes with its own controversy, Orsato continues to show he could handle the pressure that comes with each match with his impressive officiating.

The 45-year-old Italian referee has been a certified professional referee since 2010 for FIFA and has been in charge of over 434 matches since been promoted as a grade-A official.

He was rewarded for his impeccable officiating in 2020 as the best referee by the International Federation of Football History & Statistics (IFFTHS).