Champions league: How Borussia Dortmund Could Possible Lineup Ahead of Lazio Clash

By Modosky (self media writer) | 2 years ago

It was in the UCL last season Haaland proved to the world that he had arrived on the big stage. He'll be hoping to start off strong with a goal against a Lazio side that have struggled so far.

With his willingness to run the channels for Dortmund being one of his strengths and his lethal goalscoring when presented with a chance.

He also links up well with the likes of Reus and Sancho and we are backing him to once again be a big threat against Lazio and even get on the scoresheet.

Last season's golden boot winner Ciro Immobile has had a slow start to the season and was even sent off against Inter Milan before the international break.

He'll be hoping to lead his Lazio side who have started inconsistently so far to a win against this Dortmund side who have developed an edge to their game. Immobile always poses a threat and with Dortmund likely to switch to a back four due to injuries in the centre of defence.

Immobile will fancy getting on the scoresheet or at least creating for Correa and co.

The big man Sergej is Lazio's engine and he'll once again hope to impose himself against whichever midfield duo Dortmund deploy.

The interest in him has cooled off since his stunning 2018/2019 season but he's still a very fine player and he'll be a threat on set pieces too.

Witsel will have to be at his best and he'll once again be in charge of progressing the ball to the likes of Reus and also shielding the defence.

He could primarily be tasked with keeping tabs on playmaker Alberto who orchestrates most of Lazio's offensive play. 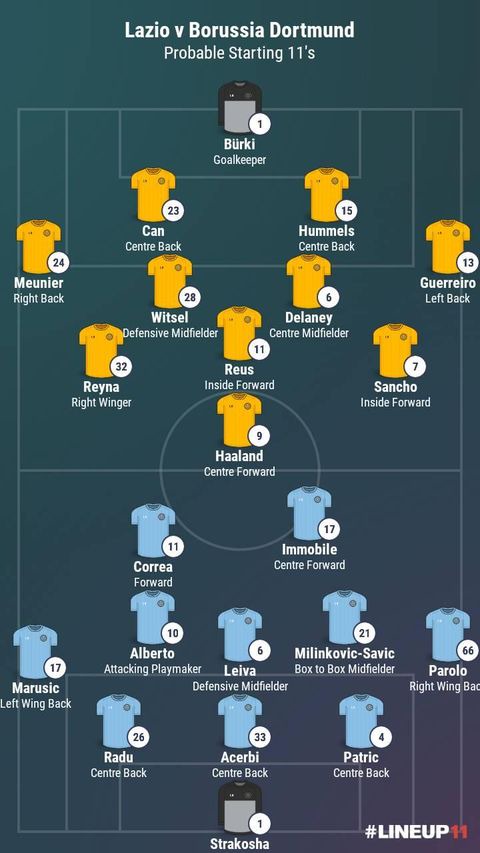 Dortmund come into this one as the better side but Lazio will be looking to get points early on after being out of the UCL for a long time.

An interesting tie awaits and we reckon there could be goals in both ends with two of the very best 9's leading both sides.

Content created and supplied by: Modosky (via Opera News )