By Niceguy (self media writer) | 20 days ago

The Argentine legend scored a stunning goal in the second half to kick-start his career in France with a decisive Champions League victory. 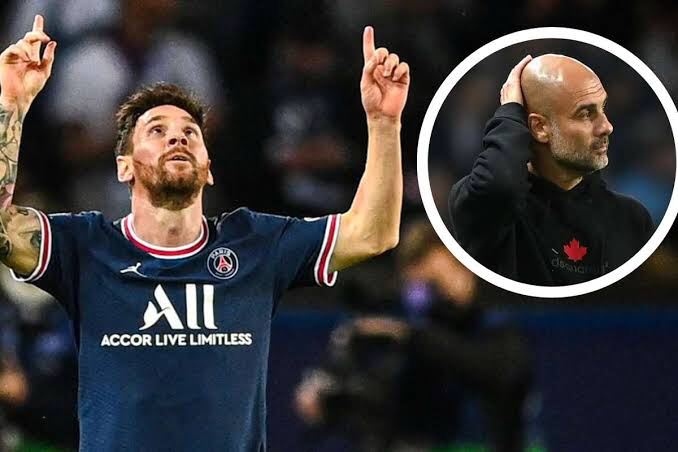 Pep Guardiola knows how to get the most out of a young Lionel Messi, and it appeared on Tuesday that he had figured out how to halt an aging one as well.

But the Manchester City manager's greatest concern was that PSG's new superstar would be capable of creating that one moment of brilliance when the two teams met in the Champions League.

The former Barcelona superstar strolled around Parc des Princes for 70 minutes in his debut European outing for his new team.

Messi appeared lost and out of sync with his teammates as City played the ball around him in search of an equaliser after Idrissa Gueye's eighth-minute strike.

With 15 minutes remained, Messi sprung into life, running with the ball for the first time in the game, swapping passes with Kylian Mbappe, and curling a sublime strike into the roof of the net.

It was a stroke of brilliance, the highlight performance in a fun game. The 34-year-first old's goal for his new club, but his 121st in the Champions League and 27th in 35 appearances in the competition.

Guardiola and Messi won 14 trophies in four seasons at Camp Nou, including two Champions Leagues, a feat Guardiola has yet to achieve. Indeed, it is a popular accusation that the Catalan coach is incapable of winning the competition without him.

Messi's hopes of winning the Cup for a seventh time had faded at Barcelona, which had been humiliated in recent seasons by defeats to PSG, Bayern Munich, Liverpool, and Roma.

Playing in a formidable attacking three with Mbappe and Neymar and at a team whose sole purpose is to win the Champions League, a move to the French capital should inspire another opportunity at European success.

However, after squandering chances to put pressure on Mauricio Pochettino's side, it might have been so much better.

They had chances, not least when they hit the crossbar twice in the space of a second. First, Gianlugi Donnarumma expertly tipped Raheem Sterling's header onto the underside of the bar, only for Bernardo Silva to fumble the follow-up.

But a moment of Messi magic snuffed out any hopes of a point, and PSG will leave the Parc des Princes confident they have finally found the missing piece to end their Champions League drought.