Why I celebrated like Ronaldo after scoring against Man Utd – Townsend

Andros Townsend has explained why he copied the iconic Ronaldo celebration, after scoring against the Red Devils on Saturday. 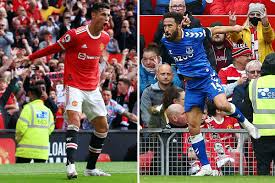 He said: “It’s just a mark of respect to a guy who influenced my career.

The Red Devils have now dropped points in three of their opening seven premier league outings this season and will need to improve their game ahead of a difficult run of fixtures after the international break.

Manchester will face Leicester, Atalanta, Liverpool and Hotspurs before the end of the month and also face Man City, The Blues and Arsenal in November.

However, Townsend scored a brilliant counterattack in the second half, to make it a draw

The Portuguese star failed to make an impact when he came on, as Red Devils remain winless in three premier league games. But Townsend has now spoken of the 36-year-old’s influence in his career.

Since Everton signed him from Crystal Palace during the transfer window, Townsend performance has been awesome.

It can be said that he rediscovered the best state of his career in Everton.

With five goals in nine matches, the star player is happy with his fine form.

A draw with Manchester United at Old Trafford means Rafa Benitez has produced the best squad since the Moyes era over ten years ago, even with numerous injuries.

Benitez hopes that most of his teams will spend the October International Match Day without injuries, and the next match against the Hammers will be on his agenda.

Cristiano Ronaldo appeared as a substitute in the 1-1 draw as Manchester United struggled again to win for the third consecutive time in the premier league.

despite seeing the Red Devils held to a 1-1 draw by Everton.

However, such dramatic probation was not enough to turn Manchester United around, and the final whistle confirmed that Ronaldo could not save the Red Devils with a winner against Everton.

The frustration of the Manchester United star is obvious. British Telecom Sports reported that Ronaldo went to the tunnel immediately.